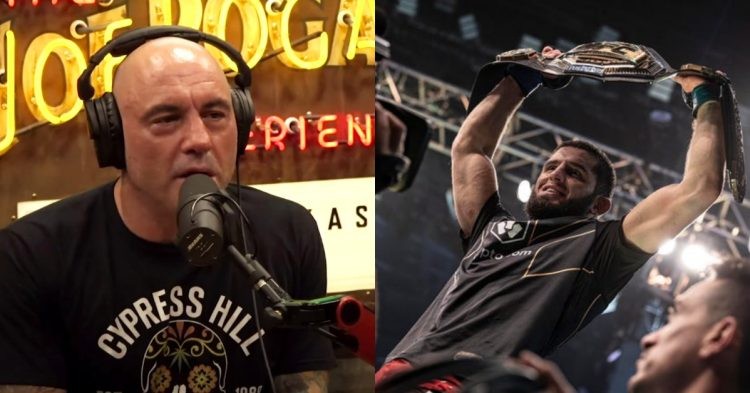 UFC lightweight champ Islam Makhachev is a special fighter. Except for one loss, Makhachev dominated all of his opponents and has built up an amazing resume. His crowing moment came at UFC 280 when he submitted Charles Oliveria to win the 155lbs championship. The manner of the win was so dominating that it made Joe Rogan wonder, who can put up a fight against Islam.

Recently, UFC bantamweight fighter Sean O’Malley appeared on “The Joe Rogan Experience.” Sean beat Petr Yan at UFC 280, which shocked the the world. On the same card, Islam Makhachev also showed his class and won the lightweight strap. Both Joe and Sean were speculating who Makhachev should fight at lightweight next.

Although he mentioned names like Dustin Poirier and Oliveira, Ultimately, the UFC commentator does not think any fighter in the division is even close to Makhachev’s level. Rogan used Charles Oliveira’s win against Justin Gaethje to prove how good Charles is. For Makhachev to utterly dominate Do Bronx, just proves the Dagestani fighter is on a different level from the rest.

“This is how good Islam is. Right? Because up until this moment, when Charles Oliveira finished Justin Gaethje, and he just beat him up and dropped him on the feet, and then submitted him on the ground, people were thinking, there’s no one that can challenge Charles. Charles is at such an elite level. Islam beats him so soundly that now, you’re like ‘I don’t know if it makes sense for Charles to fight him again.’ That’s how good he is.”

Islam Makhachev did not want to take any time off after his win at UFC 280. As a matter of fact, Khabib Nurmagomedov called out the featherweight champ Alexander Volkanovski immediately afterward. The bout will take place at the upcoming UFC 284 in February 2023. Aside from the lightweight title itself, the no.1 P4P ranking spot will also be on the line.

The LW belt & P4P status are 𝙊𝙁𝙁𝙄𝘾𝙄𝘼𝙇𝙇𝙔 on the line 👑@MakhachevMMA takes on @AlexVolkanovski in the #UFC284 main event!

Makhachev will be a huge favorite to win the bout. Not only is he the much bigger fighter, but Islam also has better grappling. The 31-year-old submitted Oliveira, who is the best submission artist in the UFC.

So It will be quite an upset If Alex gets the win. But, on paper, the Dagestani wrestler has the advantage. However, the question becomes, what is next for Islam Makhachev if he gets by Volkanovski?

The very first option will be Dustin Poirier. Poirier earned a big win over Michael Chandler at UFC 281. Ahead of the fight, The Diamond stated that he wanted a title shot after beating Chandler. So that will be the obvious choice for the UFC. Other than Poirier, Beneil Dariush is also a viable contender. Dariush beat Mateusz Gamrot at the October PPV.

Dariush and Islam were supposed to fight previously. But an injury to Beneil canceled the contest. Both fighters are amazing grapplers with decent striking. So it will be a well-matched contest.

Other than Dustin and Beneil, fans can not rule out Conor McGregor either. McGregor hinted that he would enter the USADA testing pool soon. So he may be a possible contender for Islam after UFC 284.