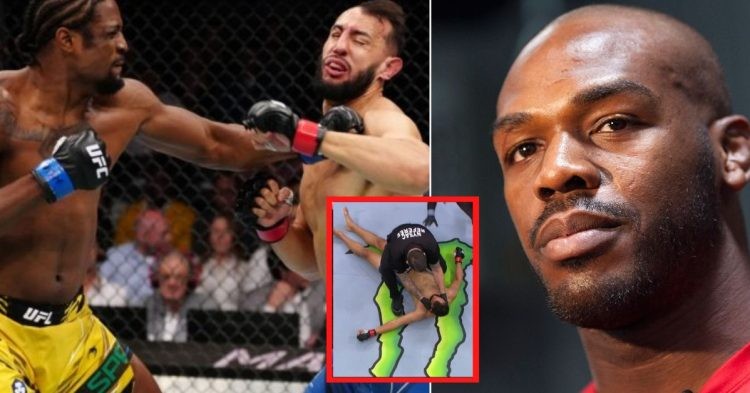 Dominick Reyes returned to action after more than a year away from the Octagon to take on Ryan Spann at UFC 281. In a fairly one-sided fight, Reyes suffered his third successive stoppage loss and his fourth straight inside the UFC Octagon. Needless to say, this has been a massive turnaround and something no fans would have seen coming.

Reyes’ loss against Ryan Spann raises a lot of questions and fans are concerned about where he goes from here. Jon Jones, who took on Reyes back at UFC 247 shared his thoughts on the former two-time light-heavyweight title challenger and gave his views on what he feels about his former adversary.

In a series of tweets, Jones seemingly criticized Reyes’ constant shots at him all the while claiming he beat the former light-heavyweight champion when they shared the cage back at UFC 247 in 2020.

I didn’t take his confidence, in his mind he beat me. Maybe that’s his problem. https://t.co/wofHtza2zv

Reyes hasn’t been the same since losing to Jones, dropping a TKO loss against Jan Blachowicz, in a fight that seemingly exposed his bad defense. He made his UFC return against Jiri Prochazka, losing the fight via KO in the second round.

Reyes absorbed a lot of damage during the course of these two fights and hinted at a hiatus after the loss against Prochazka. Making his return at UFC 281, fans were quite upset to see UFC place Reyes on the prelims and expectations were high that he would get the job done against #12 ranked Ryan Spann. However, when it all came down, that wasn’t the case.

Reyes had earlier criticized Jon Jones for waiting around after multiple delays to Jones’ potential heavyweight debut. The former light-heavyweight champion used the same line when asked to share his thoughts on Reyes’ performance at UFC 281.

‘Get on the sidelines permanently or get in the game’

That was his message to me in one of his last interviews, now that’s my message back to him. https://t.co/U7xvnayY7C

It’s safe to say the message was not meant in criticized, as the former light-heavyweight champion expressed his concern for Reyes’ health.

I don’t know if feel bad are the words, I would say more like concerned for his health. https://t.co/cnV4GaAo0j

One wonders if Dominick Reyes will make his UFC return after back-to-back devastating stoppage losses. The loss against Ryan Spann with a “jab” raises a lot of questions about his conditioning. Moreover, he looked incredibly slow in his movements and might never be what we once saw of him after this row of losses.