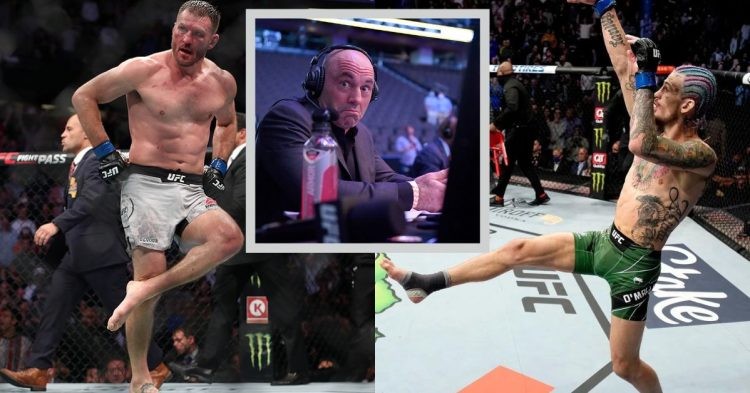 Sean O’Malley, the rising UFC bantamweight star is a fan favorite for his incredible flashy striking. ‘Sugar’ has a professional record of 15-1, with his only loss coming against Marlon Vera in the co-main event of UFC 252.

During his fight against Vera, fight commentator Jon Anik stated some bizarre facts that stunned Joe Rogan. Jon said that O’Malley and Vera were so long in their lower halves that they are longer than the then-heavyweight champ, Stipe Miocic. Anik said:

“These guys are so long in their lower halves Joe, we do measure the leg reach right now. And both of these guys from hip to foot have a longer reach than Stipe Miocic, the heavyweight champion.”

This obviously shocked Rogan as Miocic is about 6 foot 3 inches and O’Malley is 5 foot 11 inches. Joe replied shockingly after a pause: “What? How’s that possible?”

This is a weird fact if it’s true but there is no possible way of determining the lower halves of fighters, so this comes as a shock to anyone. ‘Sugar’ was a rising contender in that fight against Vera, where he was a huge favorite. However, his hype train was derailed as Vera beat him in the very first round.

In that fight, it seemed like a kick thrown by Vera disabled Sean’s leg for a moment. This in turn created an opening for Vera to land some vicious ground and pound which cost Sean the defeat.

However, Sean has bounced back from the loss and won three back-to-back fights via stoppages. He is coming off a fight against Pedro Munhoz and is now scheduled to fight Petr Yan at UFC 280.

Going into this fight, O’Malley will enjoy his height advantage as he is considerably taller than Yan. The American stands at 5 foot 11 inches, compared to the Russian’s height of 5 foot 7 inches. As usual, O’Malley has a longer reach of 72″ which is about 5 inches longer than Yan’s.

Sean O’Malley has a taller frame and he can utilize his height and reach advantage in this fight. However, Yan has significantly more experience inside the octagon and has faced some of the best contenders in the likes of Aljamain Sterling (twice), Jose Aldo, Joshua Faber, Cory Sandhagen, and more.

‘Sugar’ also has some experience but the caliber of fighter he has faced is a little below Yan. The 27-year-old faced his toughest opponents in Raulian Paiva, Marlon Vera, and Pedro Munhoz. Unfortunately, Sean had a no-contest result against Pedro Munhoz in his last fight due to an illegal eye poke.

As mentioned, he was also handed his first defeat at the hands of Vera. This means that Yan is a huge jump in terms of competition and if he underestimates Yan for his short stature, it would be a huge mistake.

Yan currently has a professional record of 16-3. Two of the losses he suffered in the UFC, came against the current bantamweight champion Sterling, with the first being a controversial disqualification.

The Russian was disqualified in his first fight against Sterling, after throwing an illegal knee, which deemed Sterling unable to continue fighting. Many believed Sterling used his injury as an excuse to capture the title, as Yan was dominating the fight.

However, in their second outing, the American displayed amazing grappling skills and won the fight via a split decision, causing Yan’s second loss in the organization.

In this upcoming fight at UFC 280, O’Malley is a massive underdog against Yan. But if he wins this fight, it will earn ‘Sugar’ a title shot and also silence a lot of doubters.