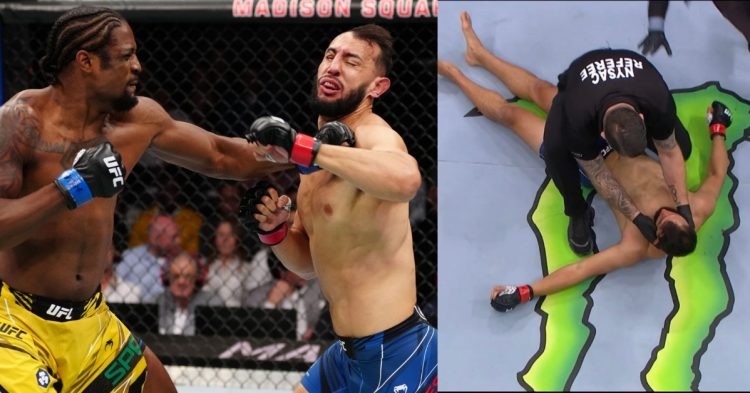 Former UFC light heavyweight title contender Dominick Reyes returned to action in the prelims of UFC 281. He was on a 3-fight losing streak and did not fight for more than a year. On the other hand, his opponent Ryan Spann beat Ion Cutelaba in May via submission. So Ryan was the more active fighter heading into the bout. So who got the job done? Let’s find out.

Ryan Spann started the bout swinging and almost dropped Dominick Reyes within the first minute itself. Reyes was the much better striker on paper. But Ryan’s power made the difference and he got the better of Reyes. A left jab from Ryan got through and put Reye’s lights out. Heading into the bout, fans thought grappling would be Spann’s best option to win the bout.

But, he just showed that he does not need to rely on his ground game to win fights. But, he made a shocking revelation after the fight. He expressed that it was the first time he had a full fight camp and it showed how dangerous he is when he trains for his fights. Superman wants a Top-5 opponent next. Dominick, on the other hand, will have a lot of self-assessments to do.

Many thought he beat Jon Jones at UFC 247. But his career took a nose-dive following the loss. He had his opportunity to become the light heavyweight champ against Jan Blachowicz at UFC 253, which he lost via TKO. The current champ Jiri Prochazka then knocked him out in May last year. So 3 KO losses and 4 losses in a row, do not bode well for his UFC career.

Even his old foe Jon Jones commented on the loss and stated his concerns for Reyes’ health after such brutal losses.

I didn’t take his confidence, in his mind he beat me. Maybe that’s his problem. https://t.co/wofHtza2zv

‘Get on the sidelines permanently or get in the game’

I don’t know if feel bad are the words, I would say more like concerned for his health. https://t.co/cnV4GaAo0j

Ahead of the fight, fans and pundits knew how powerful both fighters were. But the expectation for the bout was to go a bit longer. But, it was evident that Dom was not the same after his last few losses. Spann hurt Reyes with the very first punch he threw and the KO was spectacular. It sent the UFC community into a frenzy as they could not believe their eyes.

The bronze bomber of the ufc! Scary power

Spann is the man with power in his hand! #UFC281

What was your take on the fight? Do you think Dominick Reyes can recover from such a vicious KO loss against Ryan Spann? Let us know in the comments down below!