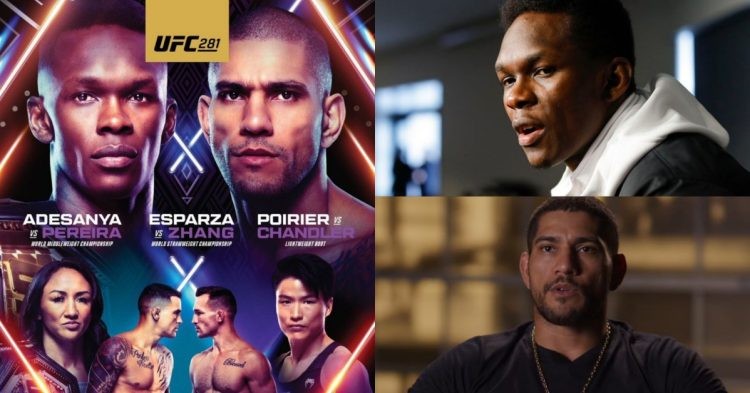 The wait is almost over as UFC middleweight champ Israel Adesanya will fight his archnemesis, Alex Pereira, at UFC 281. The excitement among the fanbase is evident as they can not wait to see Izzy and Poatan going at it inside the Octagon. However, the spectators will get a taste of what to expect from the two fighters before the bout itself!

Usually, the company holds a big press conference to promote the PPV events. Afterwards, the contestants usually face off on the stage. So fans can expect the same for UFC 281 as well. However, this will not be the first time when Israel and Alex are on the same stage at the same time. At UFC 276, Israel Adesanya fought Jared Cannonier in the main event.

During the big presser for the event, both Adesanya and Pereira were sitting on the same stage. UFC never misses out on the opportunity to capture the intricate details. Alex and Israel locked eyes while the UFC 276 press conference was going on. The Last Stylebender looked at Pereira first and then the Brazilian fighter noticed Izzy, who was sitting down below.

After a few seconds of staring each other down, Izzy looked away. However, Poatan kept his eyes locked on his target. Pereira beat Sean Strickland at the PPV to earn the crack at the current champ. So fans can expect something similar for UFC 281 press conference as well. Judging by their mutual disdain for each other, the tension may boil over and the fighters may get physical on the stage.

Fans can not get over Pereira’s cold demeanour and added how terrifying Alex looked on stage. Underneath the Instagram video, user @imadhussain wrote, “Man! That death stare by Pereira.” Another user @juandiegoaj went as far as to call Pereira the second most terrifying man in the UFC and wrote, “Pereira is the scariest guy in the UFC with Francis.”

Alex Pereira beat Israel Adesanya twice in the kickboxing ring. Although Adesanya blames bad judging for his first loss, he has no arguments about the second loss as Pereira knocked him out! To this day, it remains the only KO loss of Israel’s illustrious combat sports career.

However, Adesanya has moved on from that loss and is the current UFC middleweight champ with 5 title defences. On the other hand, Alex Pereira is coming off 3 straight wins since his UFC debut. So fans are eager to see whether Pereira can repeat history and hand Adesanya the second KO loss of his career or not. But that is not the only appeal of the PPV.

In the co-main event of the night, Chinese superstar Zhang Weili will challenge Carla Esparza for the strawweight title. UFC lightweight superstars Dustin Poirier and Michael Chandler will also be on the card, fighting each other. There is a lot of bad blood between the two and their fight style basically guarantees an amazing fight. UFC legend Frankie Edgar will have the final fight of his career against Chris Gutierrez on the main card.

⬇️ We’ve got a lot in store for you this week!