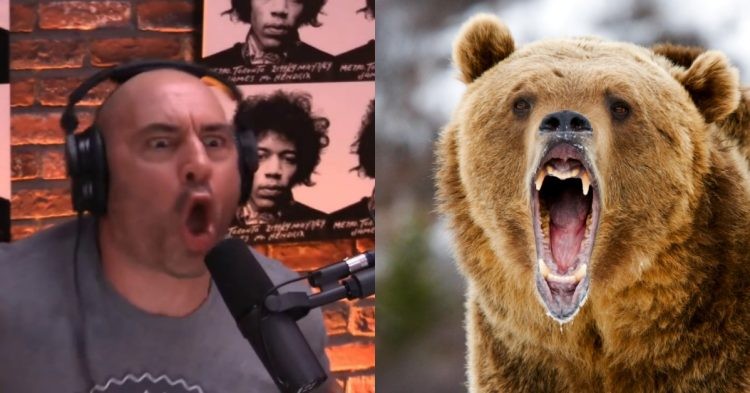 At present, UFC commentator Joe Rogan has the biggest podcast in the world! “The Joe Rogan Experience” continuously gets the biggest celebrities in the world like Elon Musk, Kanye West, and Robert Downey Jr. But it is not always about the celebrities, Rogan also puts forward fascinating stories about real life. During a JRE episode, Joe revealed a bone-chilling story about a bear attack.

In episode 1447 of his podcast, Rogan had actor and comedian Tom Segura as his guest. The two were talking about animal attacks when the 55-year-old brought up the true story of a bear attack that took place in October 2016. The victim was named Lee Brooke who somehow managed to survive the attack in Wyoming. So what went down on the day? Rogan described it in a fascinating manner.

“He’s talking while his face is gone. He’s talking about like you can see one eye through this mass… So this is the bear and this is the guy and that’s his face and this is him talking… That’s a rough look. It’s amazing how well they put that guy back together. If I was him, I’d just be the punisher for Grizzly bears. I just load up every year with a million rounds of ammo. I just go hunting bears. F**k you!”

Joe Rogan’s words certainly paint a very disturbing image. But the actual scene was much worse than one can imagine. Nothing but Lee Brooke’s right eye was intact after the attack. However, the plastic surgeons did an amazing job and reconstructed his face. During an interview with CBS, he recalled the incident and called his survival a miracle.

Joe Rogan talks about his fear of grizzly bears

Joe Rogan and his fascination with various animals are common knowledge at this point. From apes to sharks, from wolves to gorillas, Rogan always takes a lot of interest in subjects about animals. But perhaps the animals that he talks about the most, are Grizzly bears. The attack on Lee Brooke was not the only attack Rogan spoke about on his podcast.

Grizzly bears are perhaps the most ferocious species of bears. Although they do not actively hunt human beings, grizzly bears are very protective of their cubs. Whenever they sense any danger to their cubs, they become unhinged and do everything in their power to protect the little ones. They also become very aggressive when anyone tries to take away their food.

“It just roams through the woods, no fences, no fences! Break a moose’s back. My friend watched through a scope, he was looking through like a long-range scope. He watched this bear as it was chasing the (moose), ‘oh sh*t it’s chasing him, it’s chasing him.’ The Bear caught up to the moose and broke its back.”

Rogan‘s fear of grizzly bears is justified as no human being stands any chance in the face of the animal. Hence, his advice of staying away from the bears should be applied by all!