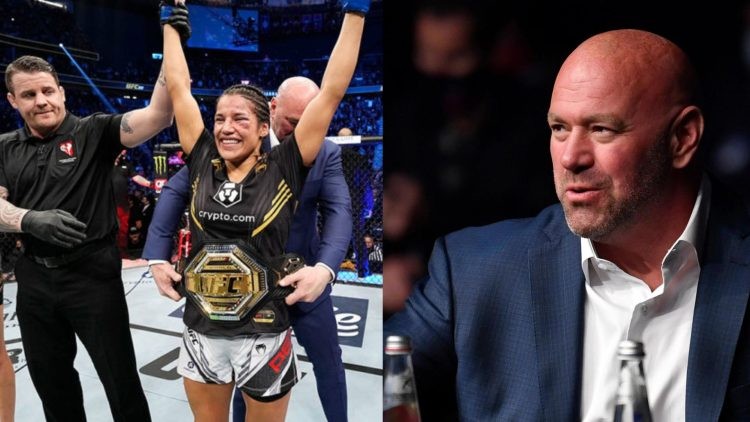 Leading up to the first fight against Amanda Nunes, Julianna Pena was mocked by the media and MMA fans for saying that she will beat Nunes. Now the fans had a good reason for counting out Julianna Pena.

Amanda Nunes is the undisputed GOAT of UFC in the female divisions. She has beaten many UFC champions such as Cris Cyborg, Ronda Rousey, and Holly Holms. Except for Valentina Shevchenko, no other UFC champion could even give her a tough fight.

So it was not too crazy to imagine that Nunes would dominate Pena in their first encounter. But, Julianna Pena’s self-belief and confidence became her biggest weapons in that fight. And after losing the first round, Julianna Pena bite down the mouthpiece and went toe to toe with the GOAT, and made her quit. And Pena’s confidence makes her one of the favorite fighters of Dana White.

It’s no secret that Dana White loves fighters who visualize becoming the UFC champion even when they are not ranked in UFC. Dana White has told stories of Conor McGregor and Ronda Rousey before where both the fighters promised Dana White to become the best in the game. Now in a recent interview, Dana White reveals the story of his first meeting with Julianna Pena.

Dana White’s first meeting with Julianna Pena will inspire you

In a recent interview with Robbie Fox, Dana White recalled when she met Julianna Pena at a Jiu Jitsu event. White was shocked when Pena came to her and predicted that she will be a UFC champion in the future. White detailed:

“The day I met her, she literally walked into the gym and rolled right up to me, put her hand out and said ‘I am Julianna Pena, I am gonn abe your women’s world champion someday, the f****d day I met her. I love that s**t. I love people who think like that, I love people that have kind of drive, people who manifest stuff like that. Not only did she do that she won the Ultimate Fighter and every time Julianna shows up you better done your s**t cause she is willing to fight.”

“It’s really hard and not to be excited and think about the main event. What Amanda is gonna show up? You know what Julianna is showing up. The crazy, fired up, total belief in herself Julianna Pena is gonna show up.”

It will be a monumental moment in Women’s MMA history if Julianna Pena beats Amanda Nunes in the rematch. But, it won’t be an easy task cause the Lioness will be hungry to get back her title at UFC 277.