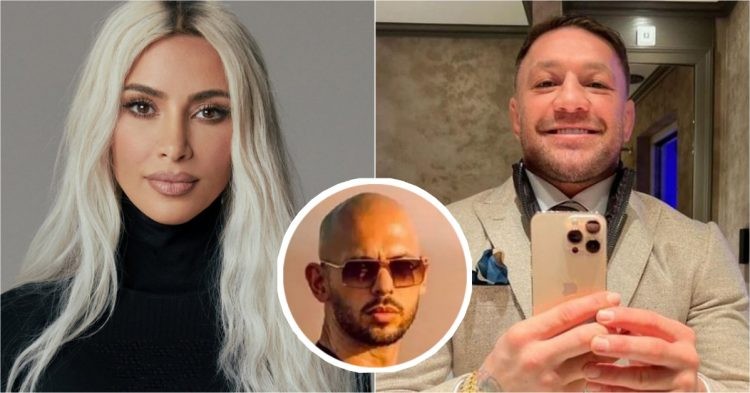 Conor McGregor is the UFC’s biggest star, a former double champion who holds the record for the quickest title fight finish. Whereas, the Kardashians are a family that is prominent in the American entertainment industry and social media. On paper, these two have very little in common. However, Andrew Tate begs to disagree.

Speaking on whether it’s better to be Golovkin aka GGG or Conor McGregor he said, “Conor McGregor is more famous…The economy we live in now is based on attention. If you can get attention in your direction for any reason, bad or good, you can be successful. The Kardashians have no reason to be successful, it’s attention.”

So, Top G believes that the ability to garner widespread attention and marketing acumen is why Conor McGregor and the Kardashians are so successful. Andrew Tate himself is no stranger to this.

He became a household name through his boisterous statements and problematic rants. He recently went viral once more after his arrest on December 29, and his feud with Greta Thunberg before that.

Andrew Tate had some unique insight into why Conor McGregor lost at UFC 229 to Khabib Nurmagomedov. It was the biggest PPV in UFC history and one of the craziest builds to a fight ever. His analysis of the battle drew a lot of attention to him as many people agreed with it.

Tate said he was sure of the outcome because the Eagle is a devout Muslim with his focus solely on fighting and Allah. “Conor McGregor cares about other stuff… I knew Khabib was going to win. Khabib is a strict Muslim. I believe in the power of Allah. Train, Allah, train, Allah, train, Allah. There’s nothing else to his life.”

Conor’s loss to Khabib was his return to MMA after he walked away to box Floyd Mayweather. At UFC 229, Conor was decimated by Khabib over the course of their fight. He tapped in the 4th round.

However, Khabib, dissatisfied with that conclusion, flew over the cage to kick Dillon Danis. It really showed fans what a savage Khabib was and really put him on the map. And it seems Top G, always knew Khabib’s win was a foregone conclusion.