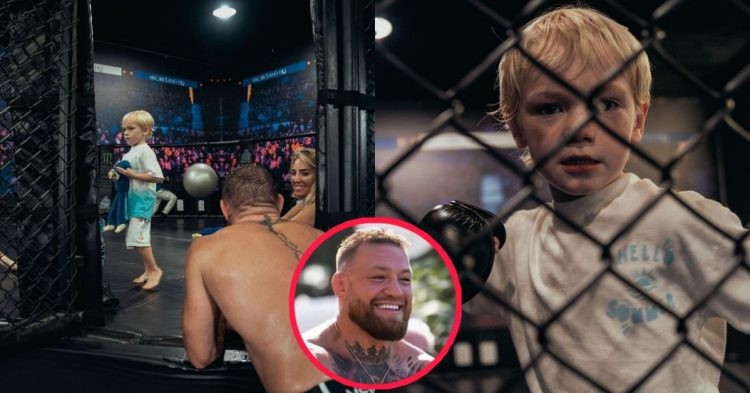 Conor McGregor recently took his son Conor McGregor Jr to the gym to train with him. After his injury at UFC 264 last year, The Notorious One is finally getting back in the swing of things. He is working hard in the gym for a possible return later this year. However, Conor is not only preparing for his future, he is also working on moulding his son with his warrior spirit.

Ever since his association with the UFC started, Conor McGregor’s star power reached levels that were unheard of! Because of his fame and PPV selling abilities. Conor soon became the highest earner in the UFC. But the hard work behind his rise is undeniable. Not only did he have to do odd jobs to make ends meet in his younger days, but Conor also fought for a very small amount of money before joining the UFC.

Hardships early in his life helped Conor to become the man that he is now. The 33-year-old wants his children to go through the same. Although they are growing up with a lavish lifestyle, Conor wants them to follow in his footsteps and continue his legacy in MMA.

“The kids will do it too. I know it. It’s too handy. Easy, even. Walkin like moses through the water off the back of the Lambo yacht. You want millions kid, no problem. Fight for it. Like your daddy had to.”

Conor McGregor will be the biggest inspiration for his children

Although Conor McGregor is going through a rough patch in his career at the moment, he still remains possibly the biggest superstar that the sport has. He inspired a lot of the younger generation to tune in to the sport. The biggest example of this is Khamzat Chimaev.

In an interview leading up to his fight with Gilbert Burns at UFC 273, Chimaev stated that McGregor’s knockout of Aldo inspired him to be an MMA fighter. Hence, Conor himself will be the biggest inspiration for his children in case they want to pursue a career in fighting.

That kid of mine is going to do whatever he wants in this world. I will support him all the way tho whatever he chooses! I feel he will do it tho. I feel his younger brother Rían will also. Interesting times ahead. I will be happy just as long as they are happy. https://t.co/uKwwO2f2ah

In August of 2021, a fan asked Conor whether he believes his sons will also be fighters or not. In reply, McGregor wrote that his sons will have his full support in whatever they decide to do. But he has an inkling that both Conor Jr and Rian will indeed follow in their father’s footsteps.

Despite having a brash personality on camera, Conor is completely different whenever he is around his kids. McGregor has 3 children with his partner Dee Devlin. His two sons are named Conor McGregor Jr and Rian McGregor and his daughter is called Croia McGregor.

Do you think the McGregor clan’s fighting legacy in MMA will grow with both of his sons joining their father? Or do you think Conor’s dwindling career will turn his children away from wanting to become a fighter? Let us know in the comments down below.