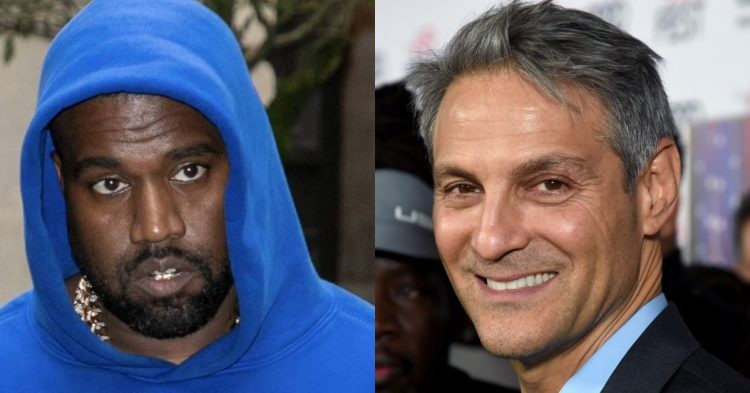 The Endeavor CEO Ari Emanuel is not a big fan of recent antics from Kanye West. The business tycoon previously addressed the issue and wrote an editorial piece for the Financial Times. In the op-ed, Emanuel requested the big media conglomerates to cut all ties with the hip-hop artist. However, it seems like West has nothing but love for the businessman.

Kanye is back on Instagram after his temporary ban from the social media site. The ban came after West allegedly posted some controversial anti-semitic messages. But this time around, Kanye is spreading the message of love. Addressing Emanuel, West posted a photo where he referenced his recent monetary losses. His caption read, “LOVE SPEECH.”

The picture read, “ARI EMMANUEL I LOST 2 BILLION DOLLARS IN ONE DAY AND I’M STILL ALIVE THIS IS LOVE SPEECH I STILL LOVE YOU GOD STILL LOVES YOU THE MONEY IS NOT WHO I AM THE PEOPLE IS WHO I AM.”

Endeavor is the parent company of the Mixed Martial Arts (MMA) promotion, UFC (Ultimate Fight Championship). They acquired the promotion for a hefty amount of $4 Billion in 2016. But they have certainly made a good investment as the UFC is more profitable than it ever was. UFC currently has a streaming deal with sports broadcaster ESPN, which is worth 1.5 Billion over 5 years.

In 2021, the Dana White-led company turned in a profit of almost $1 Billion. As Dana promised before, UFC is looking to strengthen their future over the next 6-7 years and it does not seem like there is a road bump in the near future.

Kanye West claimed in his Instagram post that he has lost $2 Billion. But the question is, Is it actually true? There is no doubt about the fact that Kanye is suffering on the financial front. The biggest blow to his bottom line was the cancellation of the Adidas deal. Kanye has his own footwear brand, Yeezy. German company Adidas was in charge of putting the product out to the public.

But in the face of immense pressure, Adidas had no choice but to back out of the contract. In a recent report, Forbes added that the deal was worth $1.5 billion for Kanye. On top of that, Gap, Balenciaga and JP Morgan have also ended their business association with the 45-year-old. With West losing all the major deals, there might be some validity to his claims.

As things stand, Kanye West is currently worth $400 million. But there is no indication of the blowback against the rapper going away anytime soon.

Can West recover from the situation and get back to creating music? Only time will tell. What are your thoughts on the Kanye West controversy? Let us know in the comments down below.