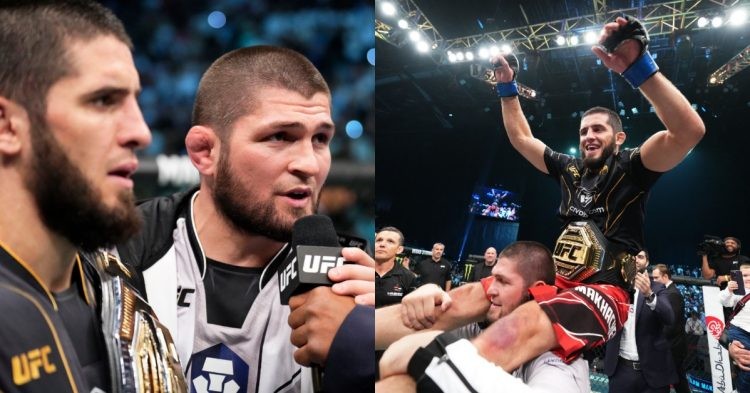 Khabib Nurmagomedov shows once again why he is one of the most beloved figures in the world of Mixed Martial Arts (MMA)!

Team Nurmagomedov held Islam Makhachev‘s fight camp in the UAE. They trained in the region for a significant period of time to get used to the conditions. However, holding a fight camp is never a cost-effective measure. But, it becomes even more expensive when it is held abroad. It looks like the UFC 280 camp was an expensive one and it cost somewhere around $1 million.

Rumours are, Khabib Nurmagomedov sponsored the entire camp and paid the expenses. Recently, American Kickboxing Academy (AKA) head coach, Javier Mendez revealed the truth and it was heartwarming. Although Mendez did not reveal the exact figure, Javier praised Khabib for looking after his fighters and paying the costs.

Not just Islam Makhachev, UFC welterweight fighter Belal Muhammad also joined Team Khabib for the event. Some of Khabib’s close friends and cousins also took part in the event. As Javier Mendez mentioned, the camp had 20-30 fighters. So paying for all of their expenses single-handedly was a costly endeavour and Nurmagomedov did it with a smile on his face.

After Khabib Nurmagomedov retired from fighting in 2020, fans wondered who will continue his legacy. Khabib was undefeated in the sport and his dominance inside the Octagon was unmatched. But Khabib’s father, Abdulmanap Nurmagomedov always believed Islam Makhachev was the one. Before his passing, Abdulmanap predicted Islam Makhachev would be the next Dagestani champ after Khabib’s retirement.

Islam did not disappoint! He went through an extremely dangerous Charles Oliveira to kick off his reign in the UFC lightweight division. But immediately after his victory at UFC 280, Makhachev thanked the late Abdulmanap and Khabib Nurmagomedov. Islam credited the Nurmagomedov family for his rise to the top.

In another beautiful moment, Khabib wrapped the belt around Islam’s waist instead of Dana White. Khabib later revealed that he wanted to do it as he never lost the title to another fighter. He was the undisputed champ at the time of his retirement.

So The Eagle, handing over the belt to Islam, was the true passing of the torch. Khabib’s time as a dominant fighter may be over, but he continues to be a source of inspiration for the next generation of fighters.

What did you think of Khabib’s generous gesture? Let us know in the comments down below.