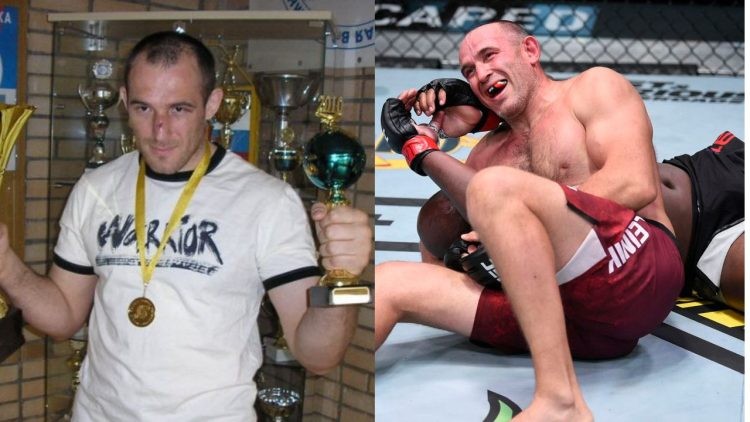 Aleksei Oleinik is a fighter in the UFC’s Heavyweight division. Also known as “The Boa Constrictor”, the Russian has established himself as a mainstay in his division and is one of the oldest active fighters.

After gradually climbing up the rankings, Oleinik (60-16-1) became a big name in his division. As time went on, Aleksei annihilated big names like Travis Browne, Mark Hunt, and Fabricio Werdum on his way to the top. Despite some losses, he is still a big threat inside the Octagon for any fighter.

Throughout his career, Aleksei has participated in numerous organizations like M-1 Global, ProFC, and IAFC and has competed for Bellator, KSW, and YAMMA Pit Fighting. As such, the Russian fighter has been fighting for around 25 years amassing numerous records and accolades in various organizations.

Over his illustrious career in numerous organizations, the Russian has also done grappling. He won the Absolute division in a grappling tournament and also won the Men’s black belt No-Gi Advanced Super weight ) division in the Grapplers Quest “Beast of the East 2011” tournament.

Which Country Is Aleksei Oleinik From?

Oleksíy Oleksíyovych Olíynyk as he is also known was born in Kharkiv, Ukrainian SSR, the Soviet Union in 1977. Standing at 6 feet and 2 inches, fights out of Moscow, Russian but also resides in Parkland, Florida, United States.

Throughout his career, Aleksei has fought in Middleweight, Light Heavyweight, and Heavyweight divisions. He specializes in Combat Sambo and Brazilian Jiu-Jitsu and trains at K-Dojo Warrior Tribe and American Top Team. Oleinik’s certifications include an International Master of Sports in Combat Sambo, a 4th-degree black belt in Jujutsu, and a Black belt in Brazilian Jiu-Jitsu.

As a result, the Russian-Ukrainian is also the founder of Oplot, an MMA Championship in Russia. Now, 45, Oleinik appears to have decided on his next profession as a promoter of his own MMA promotion.

Oleinik is a married man with 5 children between the ages of 5 and 19. He and his family moved to Florida in December 2016. His eldest daughter eldest, Polina, attends Stoneman Douglas High School, and was present at the school during the mass shooting but was thankfully unharmed.

Aleksei is a naturalized Russian citizen and expressed his support for Russia following its 2014 military intervention in Ukraine. He is denied entry into Ukraine for wearing a shirt with Putin’s face.