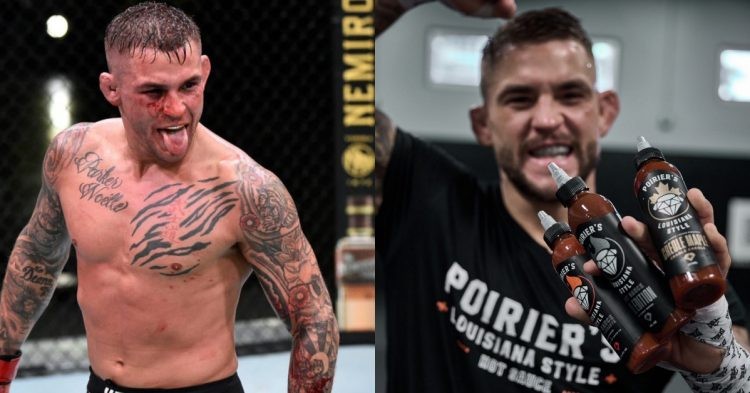 Dustin Poirier is a future UFC Hall of Famer and the former interim lightweight champ. Poirier (UFC record 20-6-1, MMA record 28-7-1) lost to Charles Oliveira at the UFC 269 main event. However, it did not decrease his popularity in the slightest! As a matter of fact, his hot sauce company “Poirier’s Louisiana Style” is now the official hot sauce of the UFC.

In a statement on 9th November, UFC announced their multi-year partnership with the company. Although the statement did not disclose how much the deal was worth, it does seem like a lucrative deal for the Louisiana native. UFC is a major brand with millions and millions of followers worldwide. Hence, the deal will give fans around the world the opportunity to discover the product.

The 33-year-old is extremely excited to get the deal done and spoke about the significance of this opportunity. He explained the reasoning behind the name and revealed the origin of this particular product. It is a historic occasion as it becomes the only hot sauce brand to have a partnership with the UFC.

“It means a lot to have Poirier’s Louisiana Style named the first-ever Official Hot Sauce of UFC, putting in the work – whether it’s training for the next fight, creating a hot sauce company, or helping through our Good Fight Foundation – it’s all about building a legacy for my family and my community. These hot sauces come from the cuisine I grew up with in Lafayette, Louisiana. These are my roots, and I’m excited for UFC fans to share the Cajun flavors I love.” (h/t via UFC)

Is Dustin Poirier the owner of “Poirier’s Louisiana Style?”

As the name of the brand may suggest, Dustin Poirier is the owner of “Poirier’s Louisiana Style.” The taste of the sauce is a throwback to the flavors of his childhood. The Diamond was born in Lafayette, Louisiana and his hot sauce pays homage to his birthplace. The sauce is made of all the top ingredients and it can be consumed with various types of meals. The product also claims to be vegan and gluten-free.

The sauce comes in three variants. One flavor is the initial collaboration between Dustin Poirier and Heartbeat Hot Sauce co. There is another edition which is called the K.O. Edition and the only other flavor is Creole Maple. The product costs $12 per bottle. Aside from his hot sauce brand, Poirier also owns the bourbon brand, “Rare Stash.” One 750ml bottle of the drink is priced at $100.

Dustin initially launched the hot sauce product in December 2020 with the above-mentioned company Heartbeat Hot Sauce. He promoted the product in the build-up to his second fight with Conor McGregor at UFC 257. Even McGregor endorsed the product during a press conference for the PPV. Since then, thanks to his appearance on the “Hot Ones,” the brand witnessed massive growth and it is now UFC’s first-ever official hot sauce.

Poirier’s Louisiana Style – what is the brand’s net worth?

Dustin Poirier is one of the most marketable fighters present in the UFC at the moment. His two massive wins over Conor McGregor at UFC 257 and UFC 264, raised his stock and made him a megastar. Dustin has a net worth of $10 million. He has earned quite a lot of money throughout his career.

In the UFC, Dustin Poirier headlined 5 UFC PPVs which include UFC 236, UFC 242, UFC 257, UFC 264, and UFC 269. On top of that, he has a bourbon company “Rare Stash” and a hot sauce company “Poirier’s Louisiana Style.” Other than that, Poirier also has many endorsement deals which supplement his income. The deals include brands like Samsung, Reebok, Venum, Celsius Energy Drink, Robert Graham, and Everlast.

However, there is no credible report on what Poirier’s Louisiana Style’s actual net worth is.