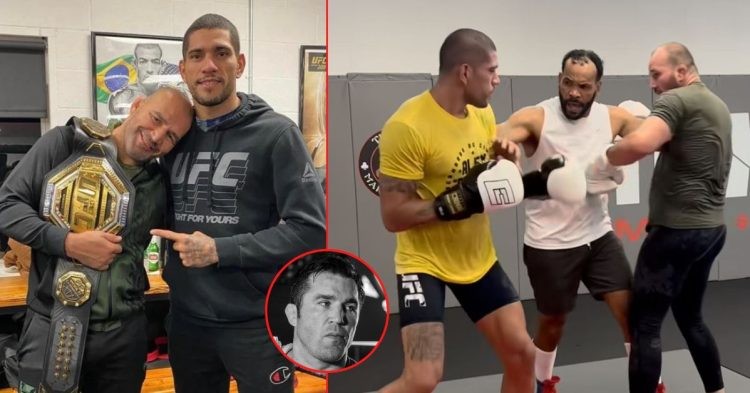 Much has been said about Alex Pereira fighting at middleweight despite the significant weight advantage. Joe Rogan even went on to call it “sanctioned cheating” after reports did rounds that Pereira weighed in the excess of 200lbs moments after the official weigh-in for his title fight against Israel Adesanya back at UFC 281.

Robert Whittaker had also commented on the same, calling Pereira a huge middleweight all the while stating how big Israel Adesanya is despite his tall and lean physique. The comparison was made in light of Pereira looking quite bigger than Adesanya during the night of the fight. “I think Alex looks big even against Izzy and Izzy’s a big dude.” Whittaker has said.

Needless to say, Pereira is cutting a lot of weight to make the middleweight limit and now Chael Sonnen argues it is because of Glover Teixeira.

Much of Pereira’s success inside the UFC Octagon is courtesy of former light-heavyweight champion, Glover Teixeira. The mutual respect is quite evident from the training sessions and Teixeira’s reaction after Pereira knocked out Israel Adesanya to become the UFC Middleweight Champion only confirms their strong bond.

Chael Sonnen believes the situation is quite similar to Daniel Cormier and Cain Velasquez, who were former training partners and decided not to compete in the same weight class.

“That’s where his mentor is at, Glover Teixeira, that’s where his training partner is. That’s where the guy who helped him to get these opportunities is at. And to save any weirdness, any potential suggestions even, of a match-up between those two, he just took himself out of the weight class and it’s not the first time we have seen this.” Sonnen said.

Let’s do it again. Everybody wants to see it and I want to prove that I am still the best. @ufc @UFCBrasil @danawhite @jiri_bjp pic.twitter.com/OGzCk8YQ45

Additionally, it’s safe to say there was more money in the Middleweight division owing to Pereira’s rivalry with Israel Adesanya. As we have it, Poatan is now set for some exciting match-ups having become the first fighter to earn a stoppage win over Israel Adesanya.

Meanwhile, Alex Pereira is set to take on Jiri Prochazka in a rematch for the UFC’s light heavyweight title on December 10 inside T-Mobile Arena in Las Vegas at UFC 282.