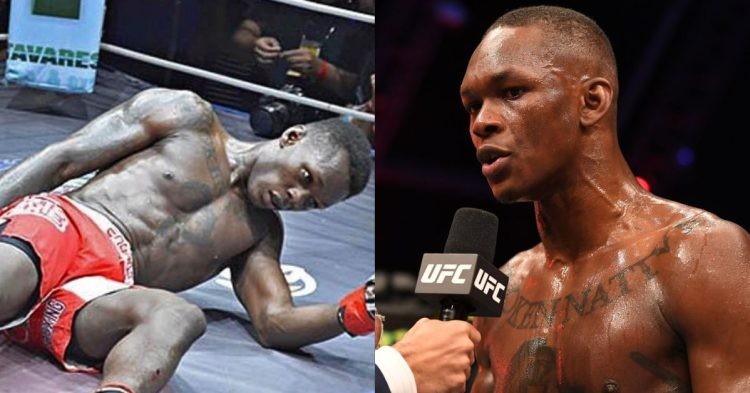 Ahead of his clash with the former two-division Glory Kickboxing Champion Alex Pereira, the UFC Middleweight Champion Israel Adesanya has made statements in regards to the unfair treatment he received in his prior two bouts with the Brazilian.

The pair met early on in both the fighters’ careers where they were pure kickboxers. Victory was secured by the Brazilian in both of those bouts. In the second fight, Adesanya fell prey to Pereira’s trademark left-hook and was knocked out cold in devastating fashion.

Years later, the pair has found itself in a similar spot yet again with Adesanya being scheduled to fight Alex Pereira this weekend. Both the fighters have made considerable progress in their respective careers, and have both become big stars in MMA.

Adesanya found success in MMA and became one of the biggest superstars to come out of the UFC, while Alex went to the most prestigious kickboxing organization, Glory FC, and became a champion in two different weight classes.

However, recently in the lead-up to his upcoming fight, Adesanya has made some remarks regarding the refereeing in his second fight with Pereira. He has blamed the refereeing to be biased as the fight was fought on the Brazilian’s home turf. Adesanya claims he hurt Pereira and was very close to finish him before the referee intervened and gave Pereira the standing eight count. The stylebender said:

“I put him on skates, but then the referee saved him. They gave him the eight-count to rest because we were in his hometown in Brazil”

Was the standing 8 count in Israel Adesanya vs Alex Pereira 2 wrong?

It is arguable whether the standing eight count was fair. The purpose for the rule is to protect a fighter from serious damage in case he’s seriously hurt and is unable to fight back. Needless to say, Pereira recovered and came back to knock Adesanya out cold in the very next round.

It’s debatable whether the referee had applied this rule had Brazilian kickboxer, Alex Pereira was not fighting in the ring that night. Even though the referee did a huge favour to Alex Pereira with the 8 count, it can’t be called a cheating.

What’s said has been said, and only the ones who were gracing the ring on that night can tell whether the referee acted in an unfair manner towards Adesanya. Not that it is of any significance to this matchup as neither of them are the same fighters.

It would also be pertinent to mention that the chance of the referee being biased has gone down considerably since the matchup is in Madison Square Garden, and also due to the fact that the referees are appointed by the athletic commissions without any influence.

The excitement is building out amongst the fighters and the fans alike as both are eager to see whether it’ll be a repeat of the previous fights, or redemption for Adesanya whose knockout loss keeps haunting him as his career progresses. The rest we’ll find out Saturday night.