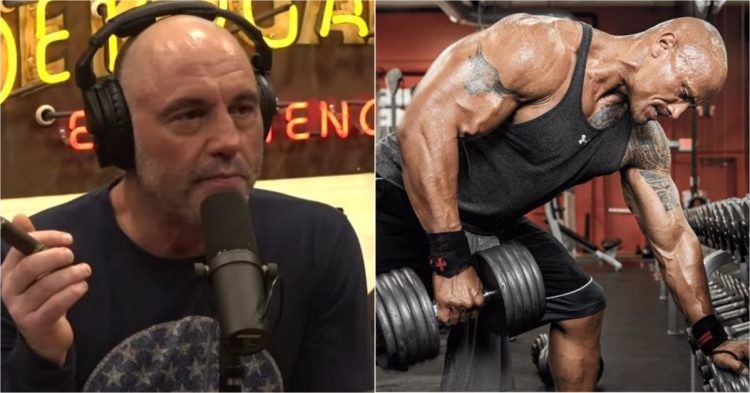 Dwayne Johnson recently starred in the DC comics movie ‘Black Adam.’ Although the movie did not make a great impression at the box office, The Rock certainly gained a lot of praise for his performance in the movie. Aside from his mature acting chops, Johnson’s physique also was a big talking point for the fans. The fact that there was no padding involved, blew the fans away!

Usually, when actors are in their superhero costumes, there are extra paddings to make their physique look more muscular for the cameras. But, The Rock did not need any of it! His natural physique resembled Black Adam’s comic iteration in real life! However, Joe Rogan thinks Dwayne is definitely on some PEDs, which are helping him in maintaining such an amazing shape at the age of 50.

“The Rock should come clean right now! He should make a video in response to the liver king video, ‘I need to talk to you because The Rock’s been lying.’ There’s not a f***ing chance in hell he’s clean, not a chance in hell, as big as The Rock is, at 50.”

Usually, after the age of 40, the male body starts losing a lot of muscle mass naturally. Hence, men who were much bigger in shape in their 20s and 30s, start to look much leaner when they approach or pass the age of 40. So, Dwayne Johnson and his astonishing physique are fascinating. Not only is he bigger at 50, but The Rock is also perhaps in the best shape of his life!

Hence, Joe Rogan suspects that the movie star may be on some substances that boost the physique. Although he does not think using PEDs to boost health has anything wrong with it, Rogan wants The Rock to be transparent about it. The 55-year-old thinks Johnson’s shape creates unrealistic expectations for men of his age, who can not achieve a such physique with natural resources.

“I don’t think there’s anything wrong with taking hormone replacement. I think it’s wise, I think it’s healthier, I feel way better than I did before I was doing it and I started doing it when I was like 37-38. And even then, I was just taking like the cream. I was taking a testosterone cream and like right away I was like ‘Oh my god! I feel so much better. Like everything felt better. I don’t think it’s wrong. I think it’s smart. But you gotta be honest.”

Joe Rogan himself is a big preacher for a healthy lifestyle. He believes everyone should eat healthily and do a lot of exercises to save themselves from any obesity-related issues. But, he has also admitted to using Testosterone-Replacement Therapy (TRT). He often talks about how it has increased his quality of life. However, Rogan was always honest about it and spoke about the benefits of using it at an advanced age.

UFC fans may remember, using TRT was legal to use in the promotion. It saw the rise of Vitor Belfort, who went on the run of his life which saw him beating the likes of Anthony Johnson, Michael Bisping, Luke Rockhold, and Dan Henderson.

However, the Nevada State Athletic Commission (NSAC) banned the substance in 2014. UFC then brought on USADA in 2015 to clean up its athletes and catch the ones who cheat the system.