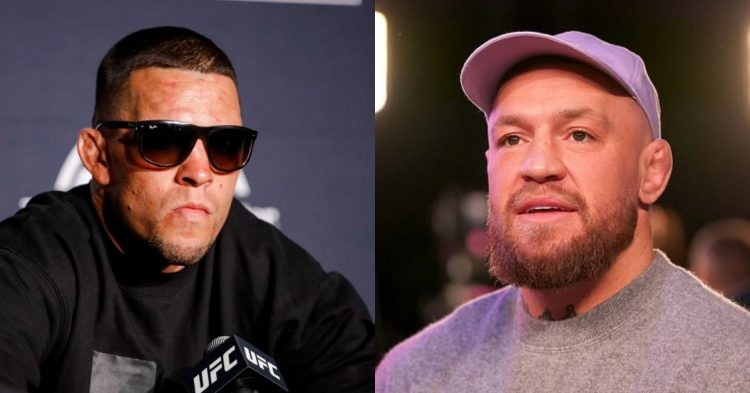 It is widely believed that Nate Diaz is on his way out of the UFC after this weekend’s event. He will take on Khamzat Chimaev in the main event of UFC 279 on September 10th. Nate previously stated that it will be his last fight in the UFC. However, there seems to be a change of heart from Nate in recent days.

Two of the biggest PPVs in UFC history involved Conor McGregor and Nate Diaz. They fought twice previously at UFC 196 and UFC 202 and they sold 1.5 million and 1.65 million respectively. It just proves that whenever Conor and Nate cross paths, it creates an insane amount of excitement in the fanbase.

However, it did not look like the trilogy bout was going to happen in the UFC after all. Even UFC president Dana White seemed like he had given up hopes for the fight to take place in the Octagon. But, in a recent interview, Nate hinted that he is up for a third fight against Conor McGregor. But the timing needed to be right for it to happen.

“The timing is not on right now, we’ll worry about that later. For sure gonna happen at some point. But not now…. Yeah at some point, you need to get back on when he’s gotta do and whatever that is. It’s like when we match up, we’re gonna match up. But we ain’t going nowhere.”

Is there a future for Nate Diaz in the UFC after UFC 279?

Nate Diaz’s interest in the trilogy bout against Conor McGregor is coming at a very crucial period. As mentioned above, Nate was desperate to get out of the UFC after years of mistreatment. He apparently has one more fight left on his current contract and it is going to take place against Nate Diaz at UFC 279.

According to the 37-year-old, he wanted to be done with the sport of MMA after his bout against Khamzat. He was heavily linked for a boxing match against Jake Paul. But it did not pan out in the end as he was still under contract with the UFC.

Since the beginning of 2022, Diaz publicly trashed the UFC for not letting him fight out his contract. He also stated that the company wanted him to be Conor’s opponent for his first fight after recovering from the injury McGregor suffered at UFC 264. But it did not happen as The Notorious One will not be back until 2023.

But, Nate’s comments on him not “going anywhere” is very interesting. Is that implying that he is currently negotiating a deal with the UFC where he stays with the company past UFC 279? Dana previously expressed that Nate is not the same fighter that he was and fighting Jake Paul may be his best course of action. It does not instil a lot of confidence about Nate’s future in UFC.

“Chimaev Is Scared as F**K”- Paulo Costa Explains His Altercation With Khamzat Chimaev and His Team at UFC PI, Says Chimaev Was Scared of Him