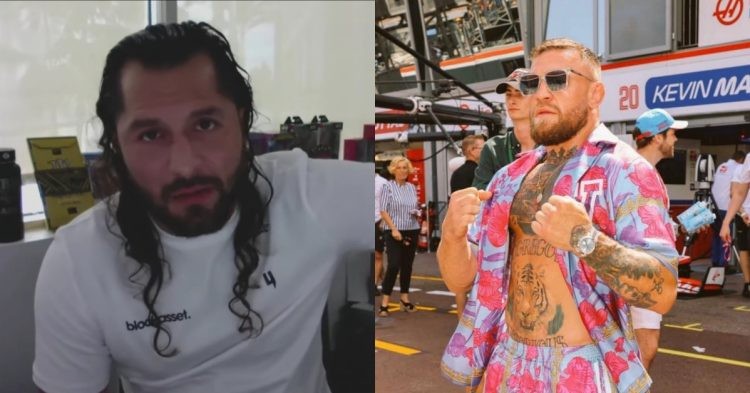 It looks like Jorge Masvidal is actively chasing a fight against Conor McGregor. During a recent interview with The MMA Hour, Jorge broke the news that the UFC offered McGregor the fight. According to him, Conor has turned down the fight because it will heart his “brand.”

Recently, ‘The Notorious one‘ called Masvidal “stupid” in a deleted tweet, Since then the Street Jesus has not stopped taking shots at Conor. After calling him out previously, now Masvidal takes a dig at Conor’s whiskey brand Proper 12 as well. Speaking to the host Ariel Helwani, Jorge added,

“He is not going to fight. The UFC’s offered him this fight…. It’s not going to be good for the Conor [McGregor] brand or his cheap ass whiskey [to lose to me), so that little b**** has to do what he has to do and Just take to Twitter and talk s***.”

The 37-year-old also brought up previous comments from UFC president Dana White where he said Masvidal was significantly bigger than Conor. In 2020, there was a huge clamour from the audience for a fight between McGregor and Masvidal.

But Dana was always against the idea as he thought the BMF champ would have a significant advantage in size. Pointing that out, Gamebred said,

“Dana White called it a long ass time ago, I’m too much Man for him, too much size as Dana says, and it stuck with him. But at the same time, he can’t do nothing about it, because he knows it’s true.” (h/t via The MMA Hour)

Conor McGregor was famous for being always available to fight the biggest challenge during his early days in the UFC. Famously, he was set to fight Jose Aldo for the undisputed Featherweight Championship at UFC 189.

But Aldo had to pull out of the bout due to a rib injury. Dana offered Conor the fight for a later date. But instead of waiting, McGregor fought Chad Mendes on short notice.

Hence, Jorge’s claims of Conor turning down the fight may not be entirely accurate. Dana White has always been adamant about the fact that Conor has never turned down a challenge. The former UFC double champ even wanted to fight welterweight champ, Kamaru Usman who knocked Jorge out.

So the question becomes, why has the fight between Conor and Jorge not been booked yet? UFC had the perfect opportunity to make the contest in early 2020 after McGregor’s KO of Donald Cerrone at UFC 246. Masvidal was event present in the arena in anticipation of a call out from Conor.

Unfortunately, both of their careers went on different paths afterwards. Due to the pandemic, the opportunity to do shows in sold-out arenas wasn’t there at the time. While Masvidal went on to fight Masvidal twice since then, Conor fought Dustin Poirier for the same amount of time.

This pea brain is the biggest fight of your life. So you’re either too scared or too stupid to get this check

But now may just be the perfect time for them to fight. By the looks of it, Masvidal is trying to re-ignite the rivalry. Being at the later stages of his career, he may not have too many big paydays left. Hence, a bout against the biggest star in the sport will certainly go a long way toward securing his future after his fighting days are over.

Masvidal has expressed the wish to fight again this year after his bout against Colby Covington in March. Do you think he can talk his way into a fight against McGregor? Let us know your thoughts in the comments down below.

Devin Haney vs Joseph Diaz Fight Purse: How Much Did Both the Boxers Earn for Their Boxing Showdown