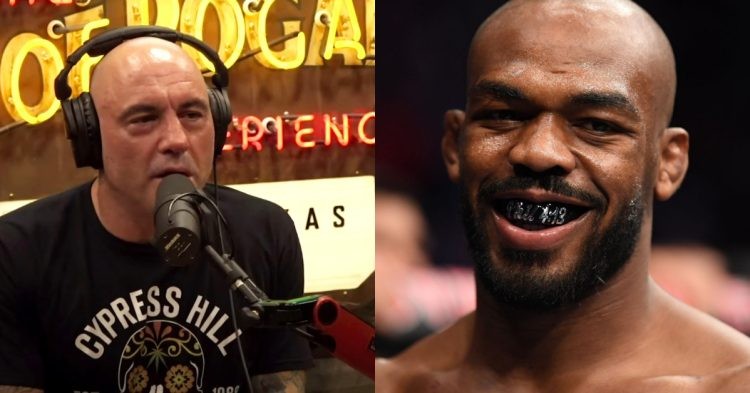 Jon Jones is inching towards his heavyweight debut in the UFC and fans want him to face Francis Ngannou for the title! Although Jon is perhaps the greatest MMA fighter of all time, Ngannou is a scary opponent. One clean connection from him is enough to put any fighter’s lights out. However, if Joe Rogan is to be believed, Jones may just turn out to be one of the, if not the best heavyweight fighter ever!

Jones announced his move to heavyweight shortly after beating Dominick Reyes in a close fight, in 2020. However, the chatter of him going up in weight was already going on for quite some time. In a Fight Companion episode on January 9th 2020, Joe Rogan and Brendan Schaub were discussing Jon’s potential in the heavyweight division.

During their conversation, both seemed extremely excited about Jon’s prospect in the higher division. Schaub, an ex-UFC fighter, made a bold claim. He said, “there’s not a man on this planet who beats Jon Jones.” The veteran comedian seemed to agree with it. Joe Rogan thought his cut to light heavyweight was diminishing Jonny Bones.

“We’ve never seen Jon where he doesn’t have to lose weight. We’ve never seen Jon, where you know, he’s not cutting 25lbs and just f***ing watching his diet. What if he’s eating healthy? Like good large portions and just hydrating as much as he wants all day long? Maybe he’s 10% better. You know, we don’t know. Maybe Jon Jones is really like the best 240lbs heavyweight in the world!”

Dana White reveals Jon Jones will not fight in 2022

Some Reports initially suggested that Jon Jones will make his heavyweight debut at UFC 282. It is the last scheduled PPV of the year and Jones’ return would have been the perfect way to wrap up 2022. However, that will not be the case, unfortunately. UFC President Dana White recently broke the bad news to the press during the UFC 280 fight week.

Speaking to The MacLife, Dana revealed that the company is eyeing an early 2023 date for the 35-year-old’s comeback. But, who will the former UFC champ face upon his return?

Dana clarified, it will either be the current champ Francis Ngannou or Stipe Miocic. Either way, Jon will not have a soft landing on his UFC debut. Neither fighter will let him have an easy time in the Octagon and it will make for a fascinating viewing experience.

UFC reportedly tried to book the bout between Jones and Ngannou for UFC 282. However, The Predator, who went through reconstructive knee surgeries, was yet to recover fully. So waiting was the only course of action for the promotion. Although Jon vs Stipe is a big fight in its own right, the bout against Ngannou is potentially a massive PPV seller.

Do you think Jon Jones will have to wait for his UFC return until Francis Ngannou is fully functional? Or do you think the UFC will move forward with a potential interim title bout between Jon and Stipe Miocic? Let us know in the comments down below.