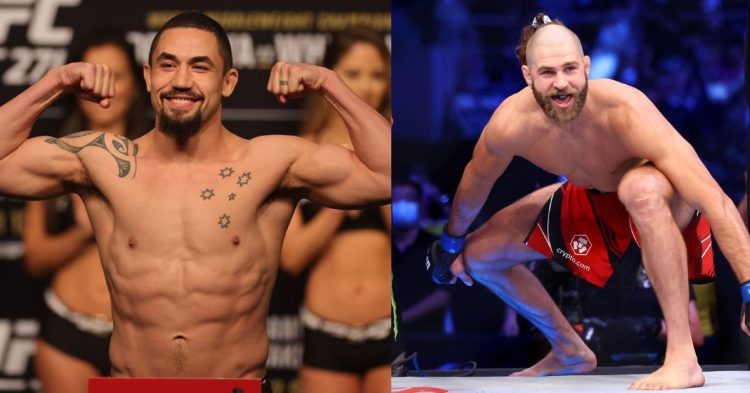 Robert Whittaker is one of the fan-favorite fighters in the UFC. Not only is the Aussie an incredibly nice and genuine person but he’s also a warrior inside the Octagon. This weekend, The Reaper takes to the Octagon once again as he faces contender Marvin Vettori.

Having been a Middleweight for the majority of his career, Robert feels as though he wants to go up to 205 now. For the most part, his decision seems logical as Robert is the clear No. 2 and still a long way from the third shot at Adesanya. However, how would he fare against the bigger guys at light heavyweight?

On his podcast show with Big John McCarthy, Josh Thompson talks about the situation. “I look at all the guys in the 205-pound division and there’s not one that I look at, that he can’t beat.” Although most people would agree with this statement, there are also certain things that you cannot overlook.

Firstly, MMA is unpredictable. Just because it makes sense on paper does not mean it will play out similarly in reality. “I’m not saying he can’t be beat, I’m simply saying that he could beat all of them,” adds Thompson. One of the major factors in Robert’s fights against Adesanya was his reach disadvantage.

As such, the Aussie could well face similar problems against the bigger guys in the 205 division. The idea at Light Heavyweight would be to contend for the title as soon as possible. Speaking about a potential match-up with 205 champ Jiří Procházka, Thompson says, “Robert’s got the cleaner stand up, he’s got the ability to get takedowns and Jiří is not the best off his back.”

What’s Next for Robert Whittaker?

Although The Reaper is not one for looking past his opponents, it seems he’s already made up his mind. For him, beating Vettori and moving up to Light Heavyweight seems to be the plan. Although, if Vettori gets the victory, it would throw a spanner in the works for Whittaker.

Marvin Vettori is no pushover. In fact, he finds himself in a similar position to Whittaker. The Italian Dream has seen defeat twice in 4 years, both to Israel Adesanya and is a way off a third shot at the champ. Moreover, due to Paulo Costa being unable to cut weight, Vettori actually fought at 205 in that bout.

Another interesting aspect to this could be if Adesanya wins his bout against Alex Pereira and offers to fight the winner of Whittaker-Vettori for a trilogy fight. Will Whittaker consider this possibility? Only time will tell.