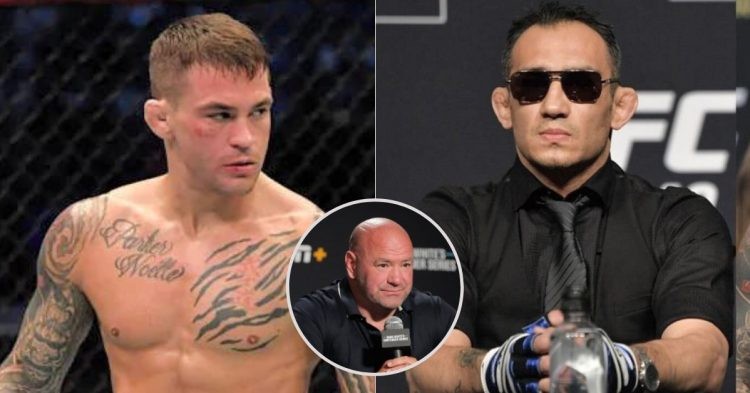 Even Khabib Nurmagomedov has teased a potential showdown between two of the best lightweight fighters in the history of UFC in the form of a potential Tony Ferguson vs Dustin Poirier in the co-main event of UFC 254. However, UFC President Dana White announced that Tony Ferguson won’t be competing at UFC 254.

“They went quiet on us,” White told TSN’s Aaron Bronsteter on Thursday (transcription via MMAJunkie). “We couldn’t get a fight done. When I call you and you want to fight (then) fight. If you don’t, no problem. I’m not pushing anybody to fight. … You don’t want to fight? We move on, and we make other fights.”

White claimed that he heard nothing from both the parties and subsequently confirmed that Tony Ferguson won’t be competing at UFC 254. White also stated that he is not going to push any fighter to fight, and claimed that he has a the fight, and if a fighter doesn’t want to fight, UFC will always have other great match-ups.

Earlier, Dana White had claimed that Dustin Poirier is trying to dodge the Tony Ferguson fight by citing negotiations dispute. Reacting to the same, Poirier sent a stern reply, “I want that fight.” Additionally, Tony Ferguson also urged Dana White to make the fight happen in a tweet where he asked White to “pay the Man.”

Recently, reports suggested that Dustin Poirier declined to fight Michael Chandler after failing to come to terms with the UFC. However, it was also mentioned that Poirier’s decision to opt-out of Chandler’s fight had a lot to do with Poirier’s respect for Tony Ferguson after the former interim Lightweight Champion advocated for Poirier both “publicly and privately.”

What’s next for Ferguson?

It was interesting to note that UFC decided to go with Michael Chandler as a backup fighter for Khabib Nurmagomedov vs Justin Gaethje at UFC 254. The former two-time Bellator lightweight Champion officially signed with the UFC recently. While it’s confirmed that Ferguson won’t be competing at UFC 254, it doesn’t rule out a Tony Ferguson return in 2020. It will be exciting to see Ferguson in his comeback fight after dropping a brutal TKO loss to Justin Gaethje at UFC 249.