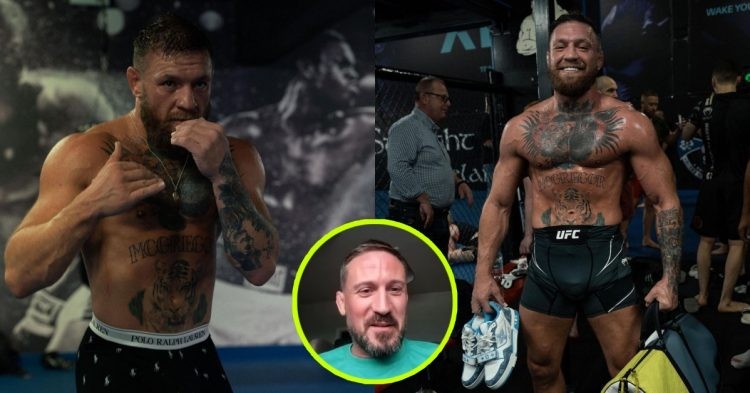 Coach John Kavanagh reveals that Conor McGregor is finally at his full strength and back in training. As the fans know, Conor suffered a horrific injury in the Octagon in July of 2021. During his trilogy fight against Dustin Poirier, McGregor snapped his ankle and he has been on the ice ever since. He had to go under the knife in order to fix the injury and it made fans wonder when Conor may return.

Dana White broke the news months ago that The Notorious One will step back inside the Octagon at the fag end of 2022. However, there was a lot of speculation about whether Conor will be able to make it by the end of the year or not because of his lack of training. But it looks like Conor is slowly picking up the pace and putting in the time to get himself back in shape.

Recently, ‘The MacLife’ put out a video that showed Conor using his injured leg to hit the bag. It was the first indication that Conor was close to being fully fit. But now it seems like McGregor is at his 100%. According to his head coach John Kavanagh, Conor just had his first full-strength training session at his gym SBG Ireland. He revealed that Conor looked very sharp during their sparring session.

“I don’t know If you can see the few knicks and marks. He just kind of showed up by surprise and of course, he grabbed me by the neck and I was subjected to a couple of rounds by this 2000-pound gorilla… but we had a great, we had a great roll around and I think that’s my, literally my first time doing some grappling with him since the lead up to the last fight.”

“So it’s been a while. He’s back, he’s back healthy now. He’s back able to do all the facets of MMA training. So he kind of remarked at the end of the session, ‘it’s day one,’ and I said Nah, that’s more like day one hundred thousand. You had a bit of a break there but that ain’t our first time doing this.”

Which weight class will Conor McGregor fight in upon his return?

Other than McGregor’s fitness, the most important thing to take away from coach Kavanagh’s comments is Conor’s weight. John jokingly stated that Conor weighs about 2000lbs at the moment. However, it certainly indicates what kind of shape Conor is in. Hence, It may have given the fans an insight into which division McGregor may return in.

Despite early rumours of him fighting Charles Oliveira for the vacant lightweight title, it does not look like the UFC is going down that path. It significantly decreases his chances of fighting at 155lbs. Recently, Nate Diaz revealed that the UFC wanted him to fight Conor McGregor. hence, it does look like Conor is aiming to make his return at welterweight.

Even Michael Chandler, who called out Conor McGregor at UFC 274, was open to a move to 170lbs in order to fight the 33-year-old. Conor also has the aspiration to be a three-weight UFC champion. So it will not be surprising to see him gunning for the Kamaru Usman fight upon his return.

But, as of now, a bout against Michael Chandler or Tony Ferguson at welterweight seems like the most likely next venture for McGregor.

Which weight class do you think Conor McGregor will return at? Do you think he will cut down to 155lbs? Or will he look to fight at 170lbs until he gets a title shot? Let us know your thoughts on the matter in the comments down below.