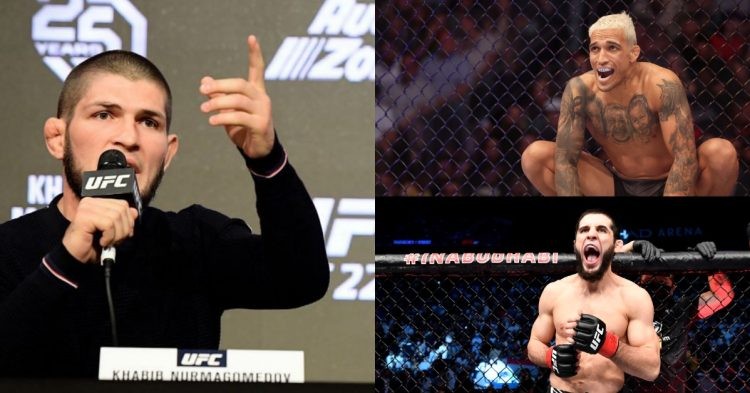 UFC 280 will finally see either Charles Oliveria or Islam Makhachev being crowned as the next UFC Lightweight Champion. Ahead of the much-anticipated clash between Oliveira and Makhachev, Khabib Nurmagomedov has made a big claim. He thinks this fight is very similar to his bout against Tony Ferguson and has labelled it as a ‘dream fight.’

There are a lot of fantasy clashes that did not take place in the UFC. Anderson Silva vs Georges St-Pierre is one and Brock Lesnar vs Fedor Emelianenko probably tops the list. But one fight that was close to happening multiple times, but ultimately got cancelled, is Khabib Nurmagomedov vs Tony Ferguson. But The Eagle thinks Charles Oliveria vs Islam Makhachev is on the same level and he has good reasons for it.

While Islam is at no, 4 in the lightweight rankings, Charles is sitting at the 1st position. They are on the longest win streak out of any fighter in the division. Hence, the two unstoppable forces meeting in the centre of the Octagon reminds Khabib of the times he was scheduled to face El Cucuy.

The former UFC Lightweight champion certainly has a point. Many fans have already stated that Oliveira’s fighting style is much like Tony’s. Similar to Ferguson, Charles also has cardio that can last the whole 25 minutes and that allows him the luxury to be on the front foot at all times. On the other hand, Islam is almost a spitting image of Khabib. But that is a surprise to none as he is a protege of Nurmagomedov.

However, fans will certainly hope that this contest does not suffer the same fate that Nurmagomedov vs Ferguson did. It will be a real shame if Charles Oliveira and Islam Makhachev do not get to fight each other in their primes.

Will Tony Ferguson and Khabib Nurmagomedov feature in an upcoming TUF season?

Ever since Tony Ferguson floated the idea that he is open to coaching a season of The Ultimate Fighter alongside Khabib, the fans have been really excited. But their excitement went through the roof when Khabib himself took note of the idea and expressed his interest as well. Dana White, who was not open to the idea, eventually came around as well.

But ever since the initial push, things have gone very quiet. However, Nurmagomedov’s former coach revealed that Khabib even had intentions of speaking to Dana White about the prospect of making the show happen. However, there has not been any update regarding the situation.

Amanda Nunes and Julianna Pena are coaching the ongoing season of TUF. But much like the season before this one, there is not any significant buzz around the show. But the rating will surely get a major boost if both Khabib and Tony are there. So it will be interesting to see which direction the UFC decides to go once the current season is over.