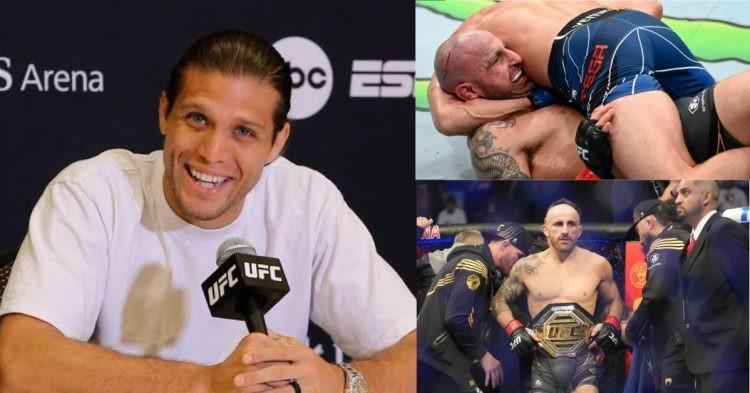 Brian Ortega will be back in action this weekend as he squares off against Yair Rodriguez in a five-round main event clash that will place at the Apex in Las Vegas. It is needless to say this matchup is the highlight of the card and fans are highly looking forward to how this fight plays out because both the featherweights are highly aggressive fighters.

Going into this fight, Ortega is on the back of a tough unanimous decision loss against Alexander Volkanovski. T-City failed to dethrone The Great as the Aussie champion stunningly got out of Ortega’s submission hold twice in the same fight.

As we build up to this fight, Brian Ortega speaks in the UFC Vegas 59 media interview about what was going through his mind after he locked in the guillotine choke against Alexander Volkanovski in their title fight at UFC 266.

“Yeah for sure man I sat there and I looked at that tape over and over again. I go how the f*** did this man get out. That choke I was, I was on top celebrating I’ll be honest with you. I was in there and I had him in that guillotine and I was just like I’m about to be a world champ like I swear I was just waiting for the tap and it never came and he got out and I was like s**t. Oh, this is a tough motherf*****r.”

It is needless to say that Volkanovski earned the respect of Ortega and shut all his critics around the world as it looked almost impossible to get out of those submission manoeuvres, especially against someone skilled like T-City.

Brian Ortega believes that he can beat Alexander Volkanovski

After expressing his disappointment about not being to finish Alexander Volkanovski and win the featherweight title back at UFC 266, Brian Ortega is confident that if he gets a rematch against the Aussie featherweight then he will defeat him with some adjustments.

“Stop being a b**”h you know like go in there and make adjustments and make sure that you’re undeniable the way he’s doing it right now.” Ortega also admitted that in order to outclass Volkanovski he needs to learn from the champion and gain that winning mentality.

“Make sure you’re undeniable the way he’s doing out right now. I need to become that if I want to become a champ I need to steal a page of that man’s book which is when he comes to that mentality you have to be undeniable.”

Most fans would agree that Volkanovski’s toughest matchup in recent times was against Ortega. So if the two featherweights ever collide inside the octagon for a rematch then there is a possibility that Brian Ortega could avenge his loss. However, T-City has to first defeat his opponent in front who is Yair Rodriguez before hoping to get another shot at the title.