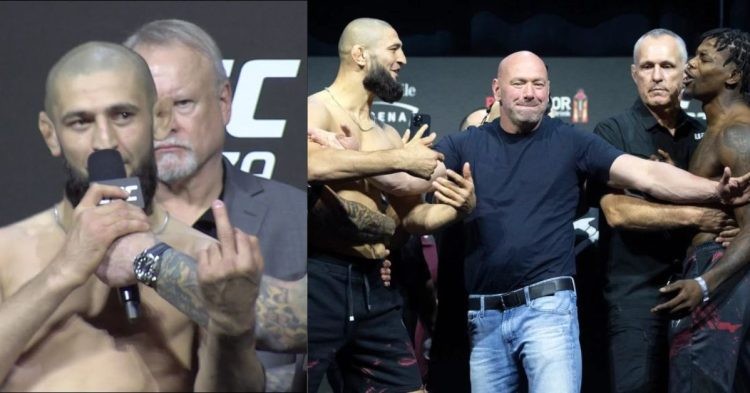 Khamzat Chimaev is one of the rising prospects in the UFC. He is not only a fearless fighter but also a fearless person. He is loved by fans for his braggadocios and larger-than-life personality. The past two days have been very eventful for the fighter.

He had an aggressive verbal tussle with Paulo Costa at UFC PI. Then, On the day of the press conference, he had an altercation with Kevin Holland and Nate’s Diaz team which led to the press conference being cancelled. Just to top it all off, He missed weight by eight pounds as he came in at 178lbs for a welterweight bout. Which eventually, left the bout being called out.

This lead him in receiving heavy backlash for his behaviour and unprofessionalism. The same was evident when he had his ceremonial weigh-in. Despite hearing boos from the audience at the UFC 279 ceremonial weigh-ins, Chimaev promised to defeat Holland despite having little to say about his weight loss embracing his heel persona.

When asked by Joe Rogan his thoughts ahead of the bout, he stated, “They stopped that sh*t (the weight cut), I don’t know. Hey, this is Chechnya motherf*ckers. Shut up, guys. I’m gonna f*ck your boy up, I f*ck him backstage as well.

When asked about why he missed weight, he dismissed to give any substantial answers. Instead blamed Nate Diaz for being a scared fighter.

With Kevin Holland at the centre of the controversy, UFC 279 has emerged as one of the most contentious and perplexing occasions ever. Now that the main event has been cancelled, it is official that Borz might be matched up with Kevin Holland in the Co-main event at UFC 279 in Las Vegas.

To clear the whole 170lb division, Holland is in an unbeatable position. The 29-year-old, who is unranked at welterweight, might face #3-ranked Khamzat Chimaev at UFC 279, which would completely alter the landscape of the weight division.

Although Holland has a chance to advance in the division, facing the Swede in the ring might be one of the worst stylistic matches he ever faces. However, one shall not count him out. In this sport, nothing is predictable. It is very much possible that we get to see an upset considering the power he possess in his shots. All one can do is sit back, enjoy the show and let cards unfold.