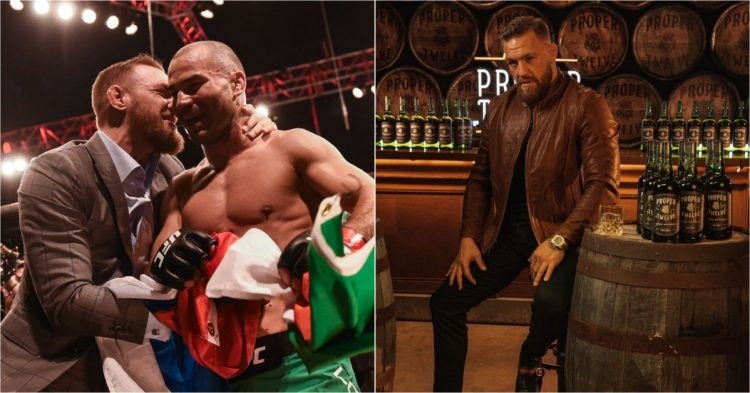 Conor McGregor is defined by his rivalries against the likes of Dustin Poirier and Nate Diaz. However, his most heated rivalry was against Khabib Nurmagomedov. It all started when Conor attacked Khabib’s team bus ahead of UFC 223. But the man behind Conor’s action was Artem Lobov, as McGregor wanted to defend Lobov’s honor.

But, it does not look like that may have been the wisest decision. Conor’s friend Artem Lobov is now suing the former UFC double champ, as he claims he was the one who came up with the idea for Conor McGregor’s brainchild “Proper 12.” It is a whiskey brand that the 34-year-old promoted heavily and turned into a global phenomenon.

Conor McGregor is being sued by Artem Lobov over a Euro deal for Proper 12.

Lobov believes he’s entitled to “5pc of the proceeds McGregor got from the sale of the brand.” pic.twitter.com/rfy0MTvNT0

However, according to a report from Irish Independent, Artem Lobov is claiming that he had a big part in popularizing the brand. Not only that, but Lobov is also stating that the entire brand was his idea! Hence, he is suing Conor, as Artem feels he should have received 5% of the total amount of money that McGregor earned from the sale of the brand.

Artem Lobov is a former MMA fighter who ended his career with a record of 13 wins, 15 losses, 1 no-contest, and 1 draw. His UFC career is also nothing to write home about. In his 7 fights, Artem had a record of 5 losses and 2 wins. He even tried his hand at Bare Knuckle Boxing and defeated former boxing champ Paulie Malignaggi. However, he always had a presence in the world of combat sports thanks to Conor McGregor.

McGregor and Lobov both were in the SBG Ireland gym together and both were trained by John Kavanagh. He was also a part of the 22nd season of The Ultimate Fighter (TUF). He reached the finals of the show and lost to BJJ sensation Ryan Hall in the lightweight division. Conor and Artem always shared a close relationship and when Khabib puts his hands on Lobov, Conor flew in to defend his friend.

However, as fans have seen time and time again, friendships do not last forever in this line of business. The Notorious One and his associates apparently made $600 million from the selling of their stakes. Hence, 5% of the total amount is still a lot of money! It has generated some interesting reactions from the fans.

Here are some reactions to the matter

Poor Conor took all the mauling, smashing, and humiliation from Khabib just to get sued by the man he fought for!

This dude conor literally gave artem a career and this is how he’s getting treated. Crazy

It be ya own people. Man smashed Khabib’s bus in for slapping him and this is how he repays him smh.

Conor made them change the rules of TUF so he could get Artem in the ufc. Damn

After the news, Conor McGregor’s publicist issued a statement and claimed Artem Lobov’s claims were incorrect. So it will be interesting to see which way the story develops in the coming days.

What is your take on Conor McGregor getting sued by his former friend Artem Lobov? Let us know in the comments down below!