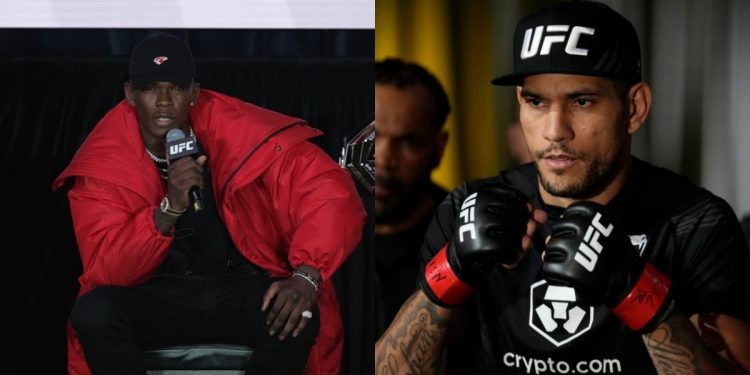 Israel Adesanya has a warning for Alex Pereira. (Images via Twitter)

UFC Middleweight Champion Israel Adesanya wants to face Alex Pereira. Reports earlier suggested that the bout between Pereira and Sean Strickland will produce Adesanya’s next challenger. The contest will take place at UFC 276, which will also feature Israel who defends his belt against Jared Cannonier.

In a promotional press conference for the event on July 2nd, Israel Adesanya was asked whether he is excited to face the winner of Pereira vs Strickland or not. Although he is looking forward to fighting both of them, Adesanya is extra motivated to face Alex Pereira. Pereira has already defeated Adesanya twice in kickboxing. But the second loss will live in infamy as Pereira flatlined Adesanya.

While some may argue that fighting for the belt only after 3 UFC fights may just be a bit too soon for Alex, Adesanya disagrees. He brought up Anderson Silva and Jiri Prochazka as examples. While Jiri became the champion at UFC 275 after 3 fights, Anderson did it only after 2. Hence he believes Alex is ready for the title fight.

However, it seems as if Izzy holds a grudge against Alex for knocking him out. The current 185lbs champion would love to have the opportunity to avenge his loss to the Brazilian. Talking about the prospect of fighting Alex, Israel Adesanya said,

“This Tik-Tok generation has 15-second memory, so they forget.  All they see is the knockout. But they didn’t watch the first fight or even watch the second fight before the finish. So this is not kickboxing, this is Mixed Martial Arts (MMA). And this ain’t big pillow gloves, these are 4-ounce deadly weapons, and I can’t wait to drive that through his face.”

The long-awaited rematch between Israel Adesanya and Alex Pereira may finally happen after UFC 276. While both of them have tough opponents to beat, there remains a possibility that both Izzy and Pereira will get their hands raised next month. If that does come to pass, then Adesanya vs Pereira will undoubtedly be a giant Pay Per View (PPV) event.

Although Pereira is relatively new to the sport, he will certainly take some confidence from the fact that he has already beaten Adesanya twice. Hence, the fight between Izzy and Alex may turn out to be one of the greatest title fights ever in middleweight history.