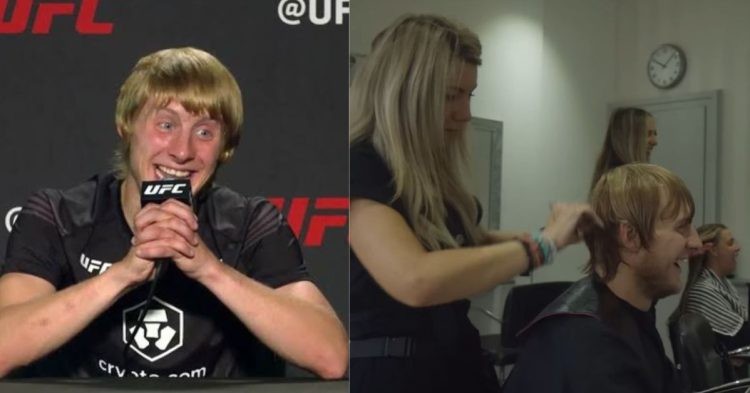 UFC lightweight star Paddy Pimblett has one of the most unique hairstyles in the promotion. The Liverpool native fighter’s fringe hairstyle is something that catches the eye of viewers the moment one sees him. What’s more surprising is the fact that he has rocked the same hairstyle for nearly a decade of his fighting career.

Many competitors and fans have trolled him in the past for his funky look and consequently,  the Scouser responded to those haters in a recent video on his YouTube channel. Ahead of his upcoming fight against Jordan Leavitt at UFC London, Pimblett posted a video where he shared the behind-the-scenes footage of his day-to-day life and preparations for this matchup.

“We’ve got our own style in Pool. The rest of the world can laugh all you want I don’t give a flying f**k.”

Later in the video, Pimblett’s hairstylist was asked to describe the UFC lightweight’s hairstyle and whether she is the person behind his funky hairdo. To which she denied having anything to do with Paddy’s hairstyle and revealed that the Scouser gives her input and she acts accordingly.

“He just makes the look himself and I just cut it. This has got nothing to do with me by the way. This is the Paddy look. If I had my way the fringe would be an inch longer.”

Before going for his haircut in his video, Paddy Pimblett recalled one of his bad hair experiences and narrated a short story about where he looked terrible during one of his fights in the past.

Thereafter while speaking to his friend, Paddy the Baddy also explained why he doesn’t get his haircut done by his mother despite her being a hairdresser. “I let my mum cut it for a bit. To be honest my mum’s a hairdresser but she cuts it easy. So once you cut your fringe it looks like you just had your haircut in jail.”

It is needless to say that Paddy Pimblett has some fascinating stories inside and outside the octagon and his recent video on his YouTube channel has helped viewers gain a lot of insight regarding his life outside UFC. Do let us know in the comments section your thoughts on Paddy’s trademark hairstyle.