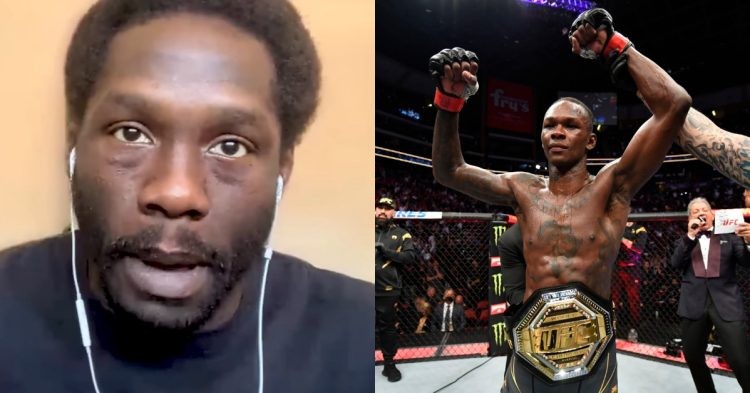 Jared Cannonier breaks down the path to victory against UFC Middleweight Champion Israel Adesanya at UFC 276. Cannonier will take on the champ in the main event of the upcoming International Fight Week PPV on July 2nd.

Even since capturing the belt against Robert Whittaker at UFC 243, Adesanya has become one of the most dominant champions in UFC history. Although he lost to Jan Blachowicz on his quest to become a double champ, Izzy has maintained his dominance over the 185lbs division. Since 2019. Adesanya has gone through one elite opponent after another.

From Robert Whittaker to Marvin Vettori, from Yoel Romero to Paulo Costa, nobody has been smart enough to solve the puzzle. Following his loss to Jan, fighters at middleweight tried to follow the same game plan. However, none of them has come close to beating the Kiwi. Will Jared Cannonier be the man to finally break Adesanya’s dominance?

The next challenger to Izzy’s belt, Jared Cannonier recently gave a detailed interview to Submission Radio. Among many topics, he was also asked to comment on whether there is one single way to beat Stylebender or not. The Killa Gorilla dismissed the question right away. He was very respectful towards Israel Adesanya and stated,

“In all honesty, I think he’s too good of a striker, too good of a combatant for you to just come over him with one thing and expect this is the thing that’s gonna work… You gotta be multi-dimensional. It’s an MMA fight. This isn’t a kickboxing fight, it’s not a wrestling match.”

Jared emphasised the importance of focusing on all the aspects of the game instead of sticking to one technique. He brought up the fictional superhero Doctor Strange who has the powers to travel through multiple dimensions. Citing the character as an example, Cannonier stated that Israel can not be beaten with one single trick.

If Izzy faces a fighter who wants to brawl with him instead of trying to play the patience game, he gets the better of them with his elite counterstriking abilities. For example, Paulo Costa and Whittaker wanted to have an all-action fight against Izzy at UFC 253 and UFC respectively. But they ultimately fell to Izzy’s impeccable game plan inside two rounds.

On the other hand, Marvin Vettori tried to build his game plan more around wrestling at UFC 263. But he failed miserably as the 32-year-old stuffed a large portion of his takedown attempts and pieced him up on the feet.

The hardest fight of Izzy’s UFC career came at UFC 236 against Kelvin Gastelum. Not only did Kelvin bring the heat with his punches, but he also mixed in takedown attempts brilliantly to halt Adesanya’s momentum. Hence, that will be the plan that Jared is more likely to follow at UFC 276. On top of being a good wrestler, the 38-year-old also possesses an insane amount of power being his punches.

Can Jared Cannonier be the fighter to finally hand Israel Adesanya his first loss at middleweight? Let us know your thoughts on the subject in the comments down below.