“This Kid Was Crying, He Was Terrified”: Justin Gaethje Recalls Knocking Out a Bully in College 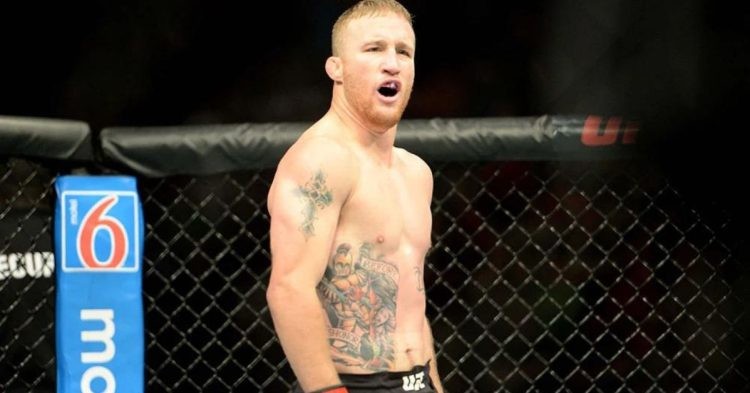 Justin Gaethje is without a doubt one of the most violent fighters in UFC history. He has a 100% finish rate in his UFC career. And he has zero boring fights so far in his long MMA career. However, Gaethje was not always this human wrecking machine.

Justin Gaethje was into multiple sports since his childhood. But, he never competed in combat sports. He was a decorated wrestler but he never needed to throw a punch except on a few occasions.

In a recent interview with BTSport, the UFC interim lightweight champion recalled the time when he taught a valuable lesson to a bully. Gaethje recalled:

“I was never in a street fight, never in a one on one street fight. It was a couple of big brawls in college where I punched people. The first one you couldn’t even move shoulder to shoulder and a fight break out. When that happens and everyone’s intoxicated you know there were girls going through walls. It was dangerous. At that time, I backed myself into a corner, I never been in a fight, never thrown a punch never been punched. Some guy was picking on this overweight kid. This kid was crying and he was terrified. I said something like ‘leave him alone’. And he started hopping up and down like crazy. I smoked him and his knees went one way and his head went the other way and I was like ‘Oh Shit’.”

Justin Gaethje has never been the guy to show aggression or disrespect to his opponents. But, when the octagon door closes he is a whole different animal. And that animal needs to be at its best when it takes on the unbeaten and undisputed lightweight champion, Khabib Nurmagomedov at UFC 254.

Justin Gaethje is considered the biggest threat to Khabib’s lightweight throne and rightfully so. He has the wrestling and lethal striking to nullify the gameplan of the lightweight champion. But, gameplans go out of the window for many fighters when they come face to face against Khabib Nurmagomedov. Now whether Gaethje defied all the odds at the biggest night of his career is something the fans are curious to find out.

“He Is Gonna Whoop My A**”: Justin Gaethje Says Khabib Nurmagomedov Is Not Unbeatable