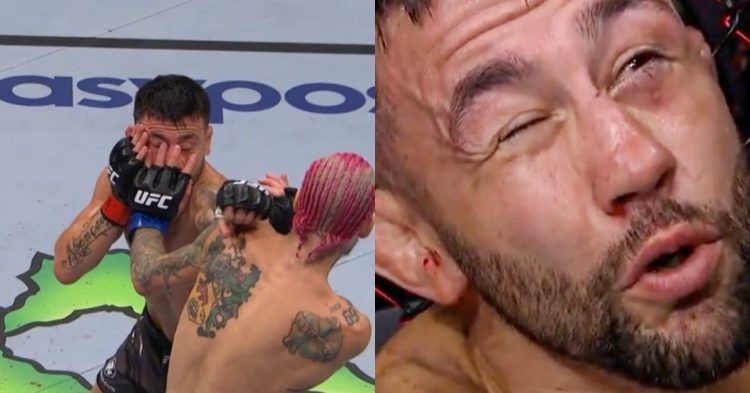 UFC 276 is finally off to the races and the very first bout of the main card was between Sean O’Malley and Pedro Munhoz. Ahead of the bout Pedro Munhoz was ranked no. 9 in the bantamweight division, whereas O’Malley occupied the no. 13th rank in the division.

Sugar Sean bounced back nicely after the humiliating loss to Marlon Vera at UFC 252. He ran through the last 3 of his opponents as Sean stopped all of them via knockout. Hence, the 27-year-old was beaming with confidence ahead of taking on Pedro Munhoz.

Munhoz was on a bit of decline before UFC 276. After beating Jimmie Rivera last year in February, Pedro has had a hard time getting going. The 35-year-old fought fellow veterans Jose Aldo and Dominick Cruz in his last two bouts. Unfortunately, he lost to both of them via decision.

As a result, Munhoz needed to win desperately in order to maintain his position in the top 10 UFC bantamweight rankings. He was the better grappler on paper while Sean O’Malley was the better striker. Who came out on top? Let’s find out.

Pedro Munhoz came out with a very clear game plan for the bout. He wanted to replicate Marlon Vera’s blueprint and immobilize Sean O’Malley with calf kicks. He found early success with that as well. Pedro’s kicks made Sean very tentative and he seemed to have a hard time reading Munhoz’s movements. But O’Malley did land some decent punches and kicks of his own.

Pedro maintained his distance very well and it almost took away the threat of O’Malley’s punches. Although Sean tried to maintain his poise and play the waiting game, he did show improved foot movement in round 2. He went forward and started landing some stiff jabs on Munhoz. Just when things were heating up, an unfortunate eye poke stopped the bout.

An unintentional eye poke has lead to the fight between Pedro Munhoz & Sean O’Malley being ruled a No Contest.

Although the referee gave Pedro some time to recover, the Brazilian fighter could not see out of his right eye and the doctor had to stop the bout from going any further. The fight was ruled a ‘No Contest.’

Was Pedro Munhoz looking for a way out after the eye poke at UFC 276?

In the replay, it was evident that Sean O’Malley’s fingers did touch Pedro Munhoz’s eye. Pedro was rushing forward and it made O’Malley put up his hands in order to keep Munhoz at a safe distance. Unfortunately, O’Malley’s fingers were stretched out and Pedro’s momentum made poke even worse.

However, veteran UFC broadcaster Joe Rogan seemed to think that the poke was not as severe. The fans have certainly seen eye pokes that looked much more brutal from the outside. Hence, they are not happy with the decision to end the fight prematurely. Here are some of the reactions from the fans.

boy thought he was gonna get a DQ 💀

Bro that didn’t even go in his eye. It was on top of the eyelid. This man is a actor

Pedro after the eye poke pic.twitter.com/e0CbWaGAEA

Pretty sad how badly he was begging for a DQ

Never put Munoz on the main card again. He took the out.