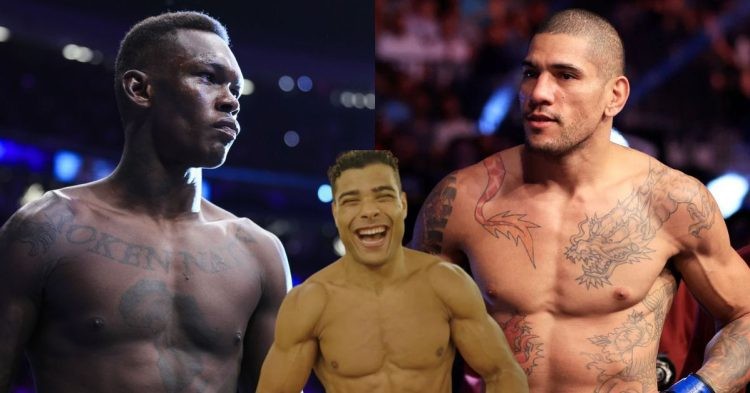 Israel Adesanya is set to take on archrival Alex Pereira in arguably the biggest challenge of his mixed martial arts career as his rivalry with Pereira from the kickboxing ring culminates at the Octagon on November 12 at UFC 281, inside Madison Square Garden, New York.

Needless to say, there is a lot of bad blood between both fighters. Less than two weeks away from the fight, Adesanya is getting “Costa vibes” from the former kickboxing world champion. Speaking ahead of UFC 281, here’s what the Stylebender had to say.

“This ni**a giving me fuc****g mad Costa vibes bro.” Adesanya said. “Hoverboard thing and I was like, I didn’t even know that was a dig at me, so I was like, okay whatever. And then he recently did the Tennis ball thing. I have seen that on Instagram and I was just like, okay.”

“I remember Costa was doing skits with his guys, same sh*t.” He further added.

In some recent clips posted by Alex Pereira, he can be seen mocking Israel Adesanya’s training style. Starting from copying Izzy’s training with Tennis balls, to boxing on a hoverboard. The Brazilian fighter has not left any chance in taking a dig at the Stylebender.

Looking deeper into the rivalry between Israel Adesanya and Alex Pereira

While Alex Pereira might be reminding him of Paulo Costa with his antics leading into the fight, the rivalry between him and Poatan goes way back. Adesanya and Costa shared the Octagon back at UFC 253, with Izzy emerging victorious with a second-round stoppage win to his name.

In the case of Pereira and Adesanya, the Brazilian fighter has had the last laugh every time they have stood face-to-face with each other. Poatan and Stylebender have shared the kickboxing ring prior to making their mixed martial arts debut, with the Brazilian emerging victorious on both occasions.

Alex Pereira is the only fighter to hand a stoppage loss to Israel Adesanya in his combat sports career which accounts for a prolific kickboxing and MMA run.

Come UFC 280, Adesanya will have a chance to get exact his revenge on the former kickboxer. If it’s indeed Costa that Pereira reminds him of, then Stylebender fans would expect a similar outcome when he last faced a Brazilian inside the Octagon. A TKO victory!