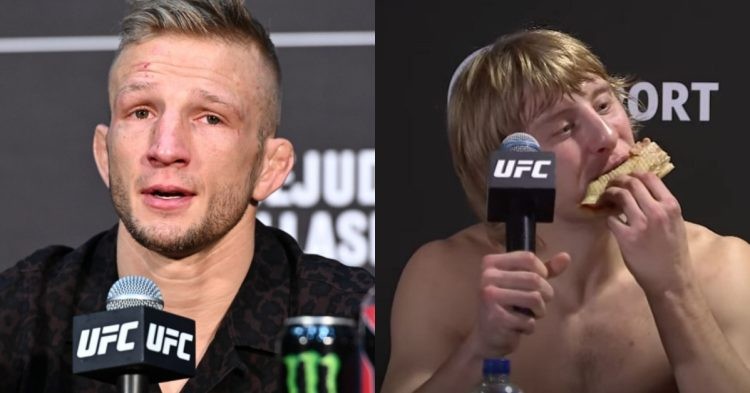 Paddy Pimblett responds to TJ Dillashaw who recently questioned his work ethic. Dillashaw stated that Pimblett’s tendency to gain an enormous amount of weight in between fight camps will only lead to diabetes, not championships. The Brit did not take to the comments kindly.

He retaliated on Twitter with some nasty dig at the former UFC Bantamweight champion. In 2019, Dillashaw was caught using EPO by USADA. He apparently used the performance-enhancing drug ahead of his bout against Henry Cejudo for the flyweight title. However, TJ was beaten anyway by Henry within a minute of the very first round.

The 36-year-old came back to the UFC last year after serving a two-year suspension. In his retaliation tweet, Paddy Pimblett brought that up as well. He called TJ a “mushroom” and asked him to remember his past before commenting on what other fighters are doing. The Baddy wrote,

Is this fella messin @TJDillashaw used to sell tee shirts with his fat face on it saying “fat Tyler” on when he came out of camp🤣🤣🤣🤣 don’t forget ur own past u sausage😉 Cheating little juice head wud never have won a belt without them steroids u fucking mushroom 🤗👍🏻🤣 https://t.co/64YL2yOG82

Paddy’s fellow countryman Molly McCann also came out in support of him. Pimblett and McCann are both from the Liverpool area and have shared a great friendship over the years. They are often seen together during their fight week, supporting each other. She wrote,

I can’t believe he’s even got the bollocks to speak like that. After being a drugs cheat the absolute mushroom

News broke last week that UFC has booked Paddy Pimbeltt to fight Jordan Leavitt next. The lightweight bout will take place on the UFC London card on July 23rd. This will be the second card that UFC will hold inside the iconic O2 Arena in London this year. Pimblett will have been a part of both events barring any unfortunate circumstances.

Jordan Leavitt is not an easy opponent for Pimblett at all. ‘The Monkey King’ has a wild personality and he is amongst one of the best grapplers in the division. Hence, Paddy will have to work hard to keep his undefeated streak in the UFC going. If he beats Jordan, it will mark his third straight win in the UFC.

But him constantly fluctuating in weight is not a good sign. He is only 27-years-old. Hence, there is a lot of untapped potential in him. Paddy needs to maintain a good diet in order to have longevity in the sport. Although over-eating may not affect him at present, it will certainly have an effect on his body in the long term.

Do you think TJ Dillashaw was right to call Paddy out for his undisciplined lifestyle? Or do you think Paddy Pimblett can keep up with the fitness standards despite his current diet? Let us know your take in the comments down below.