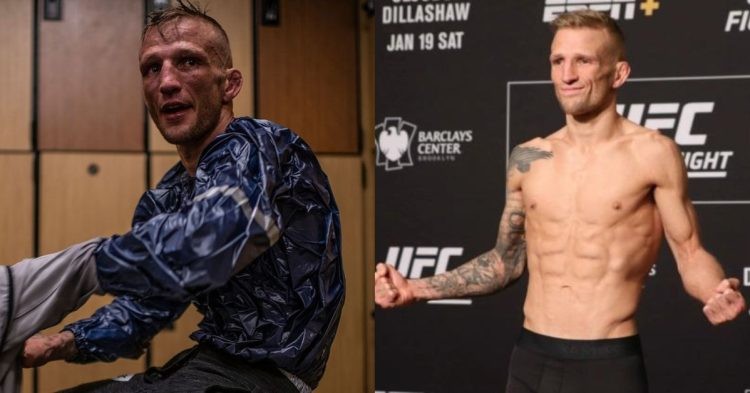 TJ Dillashaw will have the chance to make history when he faces bantamweight champion Aljamin Sterling at UFC 280. Dillashaw will take on Sterling in the co-main event of this weekend’s card, which takes place at Etihad Arena, UAE.

The former two-time UFC bantamweight champion, Dillashaw was forced to give up the bantamweight belt after resulting positive in a drug test in January 2019. That also resulted in Dillashaw’s two-year suspension from the sport.

Before this suspension, Dillashaw last fought Henry Cejudo for the UFC’s 125-pound title. Going into that fight, TJ had to cut a lot of weight but still entered the bout as the betting favorite. However, Dillashaw was beaten by Cejudo via a TKO finish just 32 seconds into the contest.

Many people argued that the massive weight cut took a toll on Dillashaw. In an episode of Logan Paul’s ‘IMPAULSIVE’, Dillashaw talked in great detail about how he cut weight for his fight against Cejudo.

“If you eat clean and the way you are eating – it’s all pushing water,” Dillashaw said.

The former champion explained how he safely cut 29 pounds. Dillashaw stops eating sodium-based food and water before the weigh-in. In addition to that, he trains and excretes all the water content in his body. He further added:

“When you’re pushing water in and out, when the water loads and the way my coaches got me doing it, I eat the night before my weigh-ins, I’ll lose in forty minutes, I’ll lose like eight pounds.”

Dillashaw has an insane work ethic and also follows a strict plan designed by his strength and conditioning coach Sam Calavitta. He is again back in shape for his next outing at UFC 280, where he hopes to make a historic comeback.

TJ Dillashaw earned the title shot against Aljamin Sterling after beating Cory Sandhagen by a split decision in July 2021. That was Dillashaw’s first fight since his suspension due to using PEDs.

During that fight, Dillashaw also suffered a knee injury. However, he underwent knee surgery after the fight and is now finally prepared to get back in the octagon. Ahead of this fight, Dillashaw shared some pictures where he looks shredded.

This has got Sterling to accuse Dillashaw of continuing to use performance-enhancing drugs in the aftermath of his suspension. The buildup to this fight has seen a lot of trash talks and accusations.

The current champion Sterling has won seven-straight fights including two victories over former champion Petr Yan. In the first outing, Sterling won the belt by disqualification at UFC 258.

However, he faced a lot of criticism and hate from an onslaught of fans for how he won the title and it was said that he faked his injury to win the title because he was already losing rounds.

Sterling silenced his haters by beating Yan in the second fight. After neck surgery and recovery, Sterling returned at UFC 273 and defeated Yan by a split decision. The co-main event of UFC 280 will see an exciting bout between Sterling and Dillashaw. Whoever wins this bout will face the winner of the O’Malley vs. Yan fight.