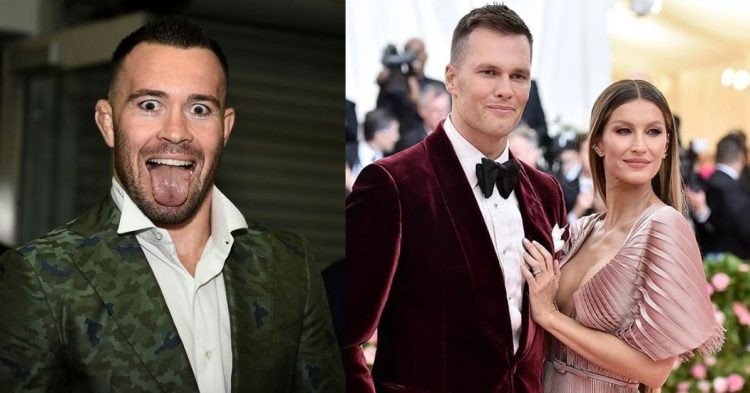 Colby Covington has taken another dig at Brazil; more specifically Gisele Bundchen. Gisele is a Brazilian Supermodel and her marriage with Tom Brady is falling, as per some sources. Tom is an American football quarterback for the Tampa Bay Buccaneers of the NFL.

Covington currently sits at #2 in the welterweight division of the UFC. He last fought Jorge Masvidal at the main event of UFC 272 and won via decision. In a recent post, Covington did a promotion video, where he discussed his favorites for week 5 of the NFL season. He wrote:

“It’s week 5 of the @NFL season and you already know Americas Champ and @RealMybookie have you covered with another winner to make your bank accounts great again!!! Hit the link in my bio and use code COLBY to get a 100% bonus on your first deposit.”

In the video, Colby started by stating the impressive record of Tom Brady. ‘Chaos’ says: “Tom Brady hasn’t lost 3 games in a row in over 20 years…”

Talking about NFL and Tom, Colby takes a cheeky dig at Gisele and said that Tom has ‘dumped’ her. He adds: “and just dumped that Brazilian broad, cause he’s married to the game…”

Covington has maintained his stand on Brazil since his victory over Demian Maia at UFC Night 119. In the post-fight interview, the #2 ranked welterweight called Brazil a ‘dump’ and its people ‘filthy animals’ and then got escorted out of the Sao Paulo arena by security.

Since then, Colby repeatedly took shots at Brazil and the Brazilian people. After leaving ATT ahead of his fight with Jorge Masvidal, Covington trained under Brazilian coaches. Even then, Colby said, “Brazil’s a f*cking dump.”

Tom Brady is returning to NFL despite announcing his retirement. As per the report, the NFL star’s marriage life has taken a toll on his career and he had to focus on his marriage life more over his career.

This, in turn, was creating some tension with his Supermodel wife, and finally, the couple is heading towards a divorce. However, there have been many fights between the couple before. But this time it seems like things are taking a bad turn as the couple is not even on talking terms right now.

Tom Brady and Gisele Bundchen started dating in 2006 after being introduced by a mutual friend on a blind date. In 2009, the couple got married and has 2 children together, a 12-year-old son, Benjamin Rein, and a 9-year-old daughter Vivian Lake.

In a recent interview, the fashion model stated that American football is “a very violent sport” and she has had conversations with Tom “to be more present” for their children. Bundchen is also keen to get her career back on track. At 42 years of age, the Supermodel feels like getting more connected with her purpose.

According to some sources, Bundchen will be getting custody of the children but she feels bad for them. It seems like their marriage is on the verge of an end and both of them are eager to focus on their respective careers.