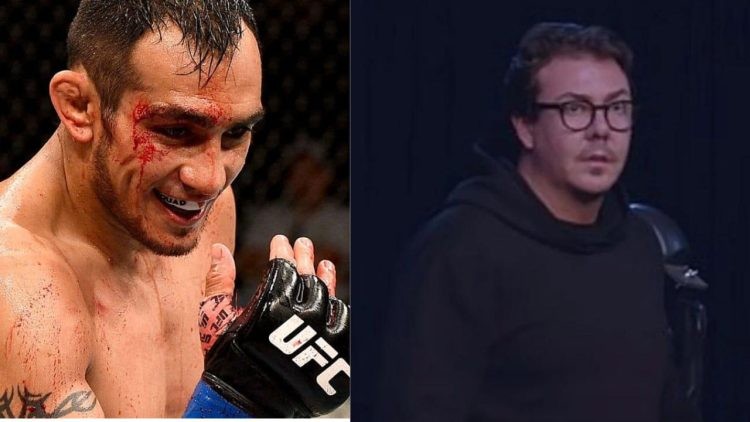 Tony Ferguson keeps doing Tony Ferguson things. Originally meant to face Li Jingliang at UFC 279, El Cucuy was offered to fight Nate Diaz on short notice instead. However, in order to make a decision, Ferguson had a special request on his mind.

Apparently, the UFC interim lightweight champion had a chat with UFC Chief Business Officer Hunter Campbell.  Campbell was the savior of last weekend’s chaos, which saw the main card change three fights two days before the event.  As such, El Cucuy felt that to fight Nate Diaz.  (plus an additional two rounds) would require extra incentive, starting with a spin around the block in Campbell’s pricey Bentley.

So, after Ferguson weighed in, he went back to visit Campbell with his idea. Whilst some reports indicate he was half-joking, others say he was completely serious: Tony told Campbell he really needed to think about it more, and that he would probably do his best thinking behind the wheel of that expensive Bentley parked outside.

The same report continues further: Campbell threw Ferguson the keys and said, “You take the car for as long as you want. I don’t give a s— about the car.” About 45 minutes later, Ferguson and the Bentley were back, and he agreed to move into the main event.

For the most part,  Tony did well. He kept the fight competitive and fought some close rounds. Not to forget, this was also El Cucuy’s welterweight debut. However, Ferguson began slowing down by Round 4, eventually succumbing to a guillotine choke from Nate.

Tony’s performance against Nate Diaz was far from convincing. Although close at times, Ferguson was largely second best until his submission. To think that Tony could have ended up facing the heavy-handed Li Jingliang instead is a frightening possibility.

Having taken a significant amount of damage in this fight as well, questions need to be asked regarding Ferguson’s health.  Years of sustaining heavy amounts of damage have begun taking their toll on El Cucuy. Following the last defeat to Chandler, Tony admittedly considered retiring as well.

Thus, we hope that he gives it a thought again. Tony has had an illustrious career, beating some big names in the sport and having some amazing highlight moments. Following the loss to Diaz, The former lightweight fell to No. 15 in the official rankings. Will Tony continue? If so then at what weight? Leave your thoughts in the comments below.