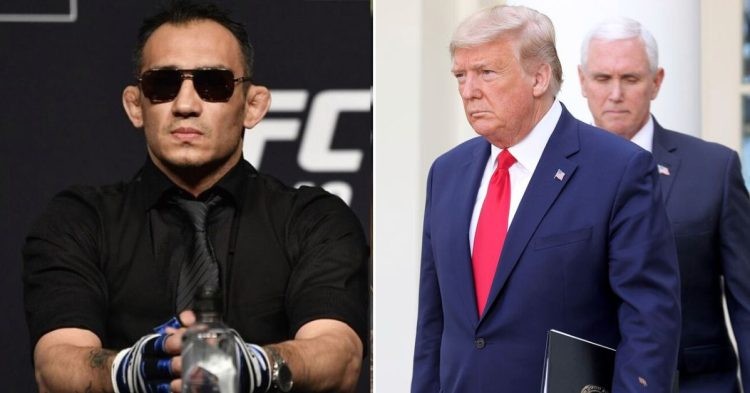 Though it was a highly entertaining fight, Justin Gaethje was the better man that night. Gaethje put on the best performance of his career against the toughest opponent of his career yet to win the UFC interim lightweight champion.

With that loss, Tony Ferguson lost his incredible winning streak in the UFC lightweight division. He also lost another opportunity to fight Khabib Nurmagomedov for the lightweight title. Nevertheless, he did put on a show for the fans. Though the outcome of the fight was disappointing to some everyone appreciated the heart Ferguson showed during the fight.

Tony Ferguson receives praise for his fight with Justin Gaethje

“Haven’t shared this with many. But wanted to say Thank You to President Donal Trump for the kind words regarding my fight against Justin Gaethje( Late Replacement for Khabib Nurmagomedov title fight at UFC 249). After a Good Job to Dana & us fighters who stepped up to put our sports back in motion for the world. He asked Dana if I could’ve finished the fight. He said F*** yeah. Coach Trump said that I was tough as nails & to keep it up. Thank you, sir.”

Tony Ferguson also thanked Dana White and UFC for putting on events while most of the world is shut down due to the pandemic. Ferguson continued:

“Incredibly proud of Dana White, Sean Shelby, UFC, a few others, and myself who worked around the clock, kept on our toes, and made shit happen no matter what was going on.”

Even after the loss, Tony Ferguson has not given up on his dreams to be the lightweight champion. He is likely to fight Dustin Poirier in the co-main event of UFC 254. And a win over Poirier will certainly earn him another opportunity to fight Khabib Nurmagomedov. And the fans might finally see the long-anticipated fight between Ferguson and Nurmagoemdov.