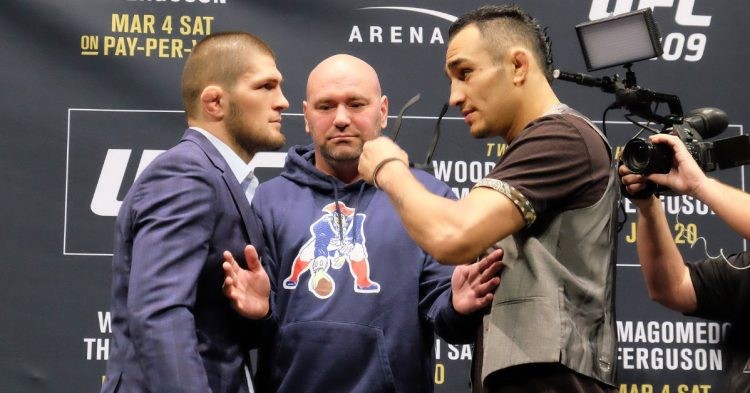 Who could have thought that the biggest adversary of Khabib Nurmagomedov beside Conor McGregor for obvious reason, Tony Ferguson will never get to fight the undefeated lightweight champion. After failing to meet inside the octagon on previous five occasions inside the Octagon, most recently because of the pandemic, Ferguson accepted a short-notice fight against the very dangerous Justin Gaethje back at UFC 249. Ferguson suffered a brutal loss with Justin Gaethje dominating Ferguson for almost full five rounds. The referee had to step in with Ferguson visibly giving up in the latter minutes of the fifth round. In the process, Gaethje picked up the interim belt and will take on Khabib Nurmagomedov at UFC 254

“I understand, Tony Ferguson’s time is finished. Now, he is gonna comeback and someone is gonna beat him again. I believe, because when you take damage like this, you will never ever be same even if you are Tony Ferguson. You see how he give up end of the five round.”

After a dominant loss inside the octagon, Khabib Nurmagomedov believes that Tony Ferguson won’t be the same fighter when steps inside the octagon in his return fight. Khabib stated that Ferguson took a lot of damage against Gaethje, and he believes he loses in his return fight. While Khabib credited Tony Ferguson, he seemed off on the idea of a potential title match after the devastating loss.

These are interesting comments from Khabib Nurmagomedov considering he regarded Tony Ferguson as one of the greatest lightweight fighters of all time. However, it’s equally difficult to not agree with Khabib. It will be interesting to see how much Ferguson has recovered. Regardless, expectations are always high from the El Cucuy Tony Ferguson.

Khabib Nurmagomedov added that Ferguson has an incredible opportunity to fight Islam Makhachev at UFC 254. After Rafael dos Anjos pulled out of the fight for testing COVID positive, Makhachev is currently without an opponent and the possibility of the Dagestani fighter competing at UFC 254 looks really slim.

Khabib Nurmagomedov welcomes the idea of Islam Makhachev vs Tony Ferguson and stated that El Cucuy should take the opportunity considering Islam’s popularity. Khabib stated that Islam is top-10 according to him, and Ferguson will get a great pay-check if he accepts the fight. Earlier, even Dominance MMA CEO Ali Abdelaziz had offered $100k to show and another $100k to win if he accepts the fight against Islam Makhachev.