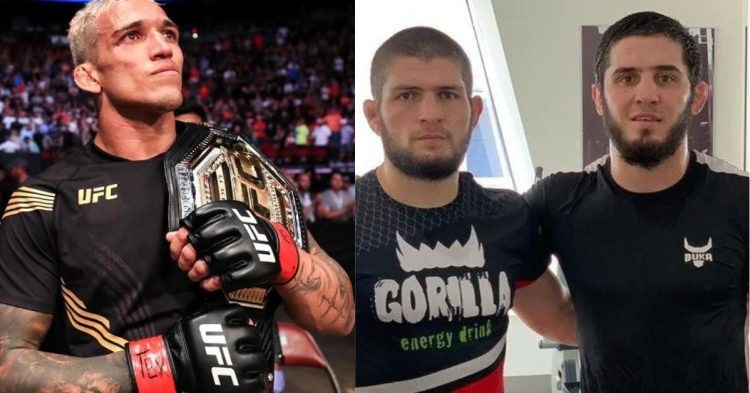 At UFC 280, Islam Makhachev will compete for the title of next lightweight champion against Charles Oliveira.

When he faces Makhachev (23-4 MMA, 6-4 UFC) on the Oct. 22 night at Etihad Arena on Yas Island in Abu Dhabi, Oliveira (33-8 MMA, 21-8 UFC) will look to reclaim the title he dropped on the scale in May. The vacant championship match was announced by the promotion during Saturday’s UFC on ABC 3 telecast.

The match-up is very interesting given their styles and methods of fighting. Although, both fighters are comfortable on their feet and engage in strikes. However, their true talent lies on the ground. It is a battle between Sambo wrestling and Brazilian jiu-jitsu.

There were many speculations as to which will prevail. The burning question was who will take down who first in their bout. Given the facts, Oliveira is more comfortable on their feet than Makhachev. Which begs the question how will he take the former lightweight champion down?

Since in recent times it has been rare to see Oliveira be taken down let alone be dominated there. Many fans think Islam can take Oliveira down from the clinch but not with double legs or regular single legs, thus Oliveira is practising for that situation in a recent video.

Islam employs incredibly deft takedown and trip techniques that are challenging to imitate. You cannot train with another fighter since each of the two is so different from the other. Khabib serving as Islam’s training partner, though, is unquestionably beneficial.

Since, the video was posted. Fans began to speculate the way the always do. However, there has been some interesting comments made about the video and their matchup. Here are few:

“Never thought i would see a resurgence of Charles that’s been so dominant like he has been, he was a good fighter in the past yet the version of him now is insane, how can you not love this guy. He has beaten abunch of killers in his last fights, and if so he gets it done at UFC 280 well what can you say. He is phenomenal”

“I really can’t call how this fight will go at all and it’s awesome! Good luck to both warriors.”
One can only speculate who will takedown or who will win, however, Khabib in the past has stated that he is confident that his longtime training partner, Islam will be victorious the way he has been. Until the fight, one can sit back and watch how this intreating fight unfolds.
Tags: Charles Oliveira
Previous Post