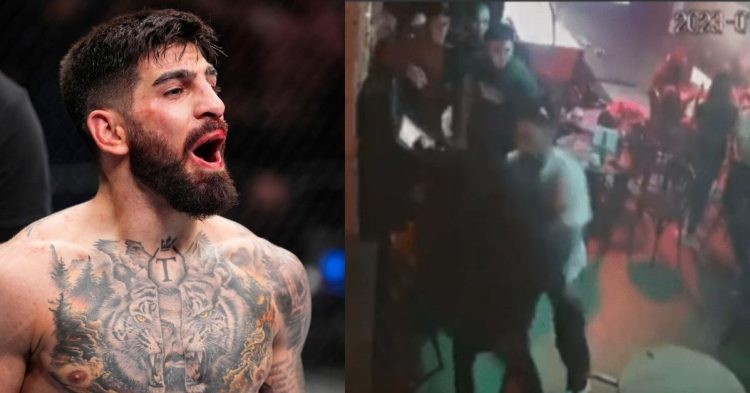 In what has already been quite the week for MMA fans, they now have one more incident to dive into, thanks to Ilia Topuria. Recently, the No. 9-ranked UFC Featherweight contender, Ilia, and Spanish singer, Omar Montes, got into a bar altercation.

The leaked footage shows an unknown aggressor approaching and shoving Ilia in a bar in Spain. Initially, ‘El Matador’ was minding his own business, playing an arcade game, before retaliating against the stranger with a barrage of punches. Eventually, bystanders and others present began getting involved to stop the fight.

During the time of the incident, the Georgian fighter was accompanied by Spanish singer Omar Montes. As the scuffle ensues, Omar, a former Spanish welterweight boxing champion with more than 100 fights, jumps to aid Topuria. Although there is no sound, presumably, words were exchanged as Topuria is seen being pushed before the scuffle ensues.

At the time of writing, there are no details regarding the unknown attacker or the location of the incident. Similarly, there are no reports of any police involvement in the matter, either. Moreover, an official statement from Topuria and Montes regarding the situation is awaited.

Interestingly, this is not the first time Ilia has gotten into a confrontation outside the Octagon. The Georgian featherweight has been involved with lightweight Paddy Pimblett, first in London and then during the UFC 282 pre-fight press conference.

Is Ilia Topuria unbeaten in the UFC?

Topuria recently earned the biggest win of his career at UFC 282 in Dec. 2022. Facing Bryce Mitchell in the opening bout on the main card, Topuria utilized his superior striking and strong grappling defense to score the win via a second-round arm-triangle choke submission. Topuria was also awarded Performance of the Night for his victory.

Currently, with a record of 5-0 in the UFC and 13-0 overall, Topuria is now ranked No.9 in the featherweight division’s rankings. The Georgian is young, hungry and a notable threat to the 145-pound crown. Additionally, Ilia has his sights set on Brian Ortega, as he looks to make his case for the title shot.

However, Ilia might have to wait his turn if there are any legal ramifications from his bar fight. What are your thoughts on Ilia Tuporia’s recent fight? Leave your thoughts in the comments below.