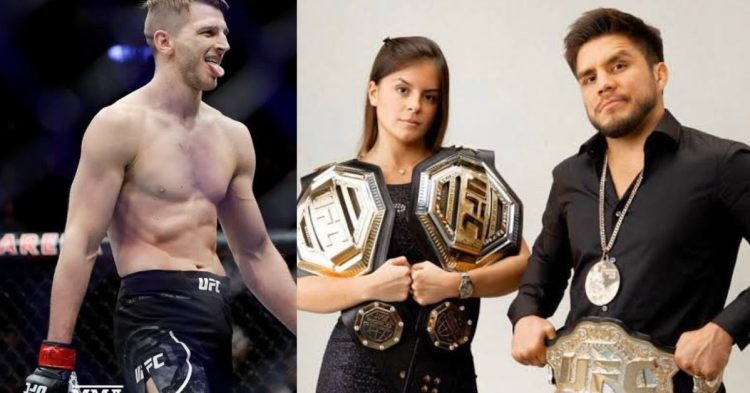 Henry Cejudo aka Triple C retired from MMA back in 2020 at the age of 35. Cejudo surprisingly announced his retirement in his post-fight interview after beating Dominick Cruz to retain the bantamweight title at UFC 249.

Cejudo was at his peak at that time, racking up victories against Demetrius Johnson, TJ Dillashaw, Marlon Moraes, and Dominic Cruz. Many at that time doubted the decision, wondering whether Triple C had more left in him. When asked about his decision to retire, Cejudo said he wanted to ‘leave on top’. He even expressed his willingness to spend time with his girlfriend Amanda Dallago Cheves, and start a family, “I don’t have kids. I’ve finally got a girl now, and I want to step into that new chapter of my life.”

A few months into his retirement, rumors of Cejudo breaking up with his girlfriend started to spread. Top UFC lightweight contender Dan Hooker took the opportunity and fired some verbal shots at Cejudo, Hooker said  “Melt down all of your gold and try to buy your girlfriend back after she left your little a**, hombre’.” However, these comments by Hooker didn’t make much sense as Cejudo soon got engaged with the same girl, rubbishing all the breakup rumors.

In the past year or so, Cejudo has called out has called out every big name in the bantamweight and featherweight division. But one fighter that has got some extra attention from Triple C is Alexander Volkanovski. Volkanovski is the current featherweight champion defending his belt four times and cementing his place as the Greatest featherweight of all time. Volkanovski has been so dominant in the division that he is now planning to move up a weight class and fight for the lightweight title.

“Who I’m really chasing is Alexander ‘The Average'” Cejudo said, “that’s one I’m really chasing because to me, I know that 135lbs, I want that belt to use it as leverage. I know I can beat those dudes [at bantamweight] and those dudes know I can beat them. It’s the same reason why Aljamain [Sterling], they had offered me to fight him, but he ended up picking T.J. [Dillashaw] because he knows what I’m capable of doing… If I need that belt to have leverage to fight Volkanovski, that’s kind of what I’m going for.” Henry Cejudo has never fought in the 145lbs division, but considering the weight he has gained since retirement, cutting down to 145 would certainly be easier than fighting at 135.