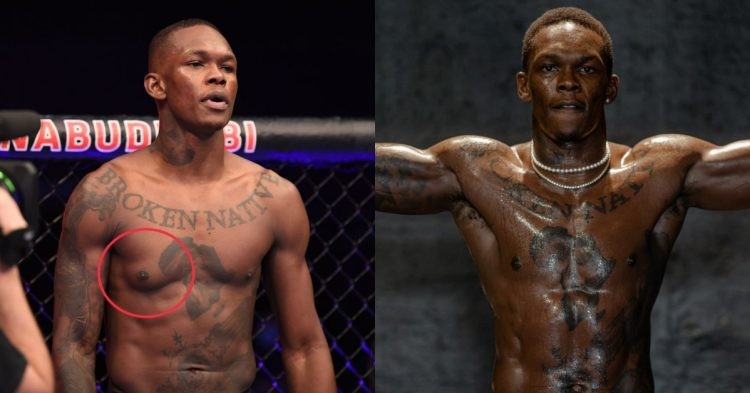 The UFC Middleweight Israel Adesanya is working hard in the gym. He will defend the belt against Alex Pereira in the main event of UFC 281 in Madison Square Garden (MSG) on November 13th. Although the fight is still over a month away, Izzy is doing his best to bulk up before going up against Pereira, who is much bigger than the current champion.

Recently, Adesanya took to his social media platform to post pictures of his workout session. He was looking noticeably bigger in the pictures than in his previous camps. In his last three fights, Adesanya has fought Marvin Vettori, Robert Whittaker and Jared Cannonier. Although they were formidable opponents, none could match Adesanya’s physicality.

But Alex Pereira is a different beast altogether! A while ago, pictures surfaced where Pereira was posing alongside former UFC light heavyweight title contender Dominick Reyes. Reyes competes in a weight class which is 20lbs higher than middleweight. Despite that, Pereira was towering over Reyes. Hence, It was imperative for Adesanya to be more muscular than before.

However, the physique was not enough to impress the fans. Ahead of his bout against Paulo Costa at UFC 253, Adesanya was pictured with a swollen left pec. Although there were rumours of steroid usage causing his gynecomastia, there was no evidence to back it up. Recently Izzy got his USADA jacket for 50 clean drug tests.

However, the recent pictures have reminded the fans of the incident. MMA fans never forget the details regarding their favourite fighters. Hence, it looks like the gynecomastia incident will chase him forever!

There is a lot of history behind the UFC 281 fight between Israel Adesanya and Alex Pereira. For fans who may not be aware, The Last Stylebender had two kickboxing fights against Poatan in 2016 and 2017 respectively. In both fights, Adesanya ended up on the losing side. In the second bout, Pereira showed exactly why he is so dangerous and knocked Izzy out in a spectacular fashion.

In his last UFC fight, Pereira knocked out Sean Strickland as well. So fans are convinced that Izzy will not be able to break the curse of losing to Pereira.

Your daily reminder that third time is in fact NOT the charm. #andnew pic.twitter.com/WgLash9vCP

You’re getting knocked spark out by your father buddy pic.twitter.com/eqQhjSNOIa

What is your thought on the matter? Do you think bulking up will help Israel Adesanya? Or, will Alex Pereira maintain his dominance over the current champ? Let us know in the comments down below.