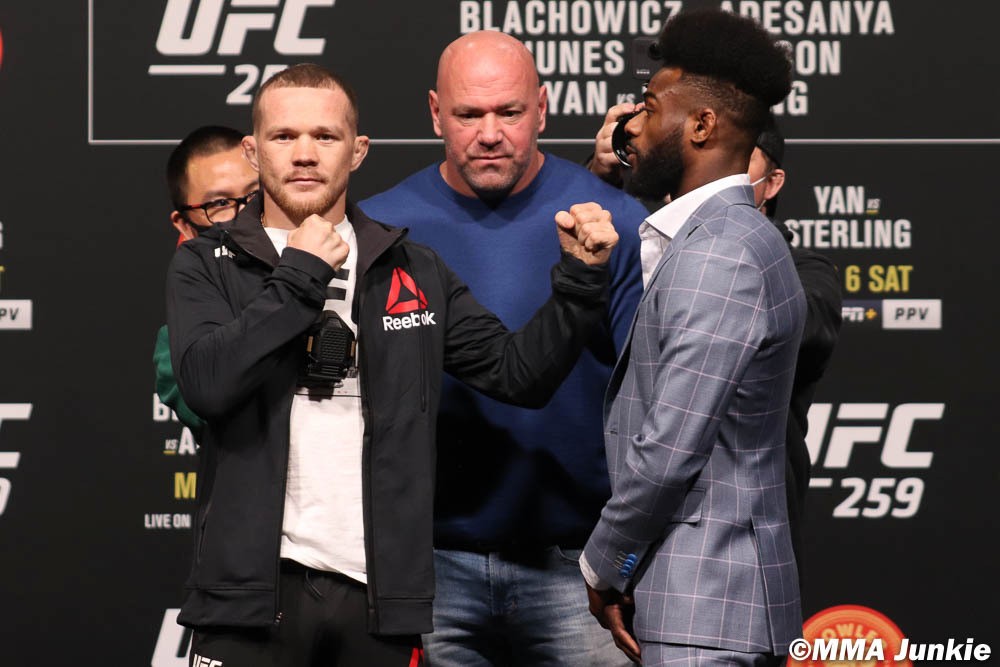 Arguably one of the biggest PPVs in recent times, UFC 259 takes place in UFC Apex on March 6th. The UFC middleweight champion, Israel Adesanya takes on the light heavyweight champion, Jan Blachowicz. However, Petr Yan vs Aljamain Sterling has all the potential to steal the show.

The skillsets both Petr Yan and Aljamain Sterling brings to the table are insane. Aljamain Sterling, who was once called the Jon Jones of the bantamweight division, is a phenomenal grappler. And Petr Yan is one of the best strikers in the division if not the best striker. This fight is going to be extremely competitive and will decide the best bantamweight in UFC right now. SO who gets the job done at UFC 259? Let’s breakdown this bantamweight showdown and predict who has the advantage going into the fight.

After his UFC debut in 2014, Aljamain Sterling has been able to build an impressive resume in UFC by beating some tough opponents such as Cory Sandhagen, Pedro Munhoz, Renan Barao, Jimmie Rivera, and the list goes on.

Sterling outclassed Cory Sandhagen in his last fight by finishing him with a rear-naked choke in under 2 minutes. Considering the fact that Cory Sandhagen has destroyed Marlon Moraes and Frankie Edgar in his next two fights, Sterling’s win over Sandhagen looks even more impressive than it did before.

Aljamain Sterling is the best grappler in the division. He is unorthodox in his approach. We are yet to see Sterling in trouble in the striking department as he has shown solid striking in fights against Pedro Munoz, Jimmie Rivera, and Renan Verao. However, Sterling’s grappling will be the deciding factor in this fight.

Petr Yan has phenomenal takedown defense. However, Sterling has claimed that he will eventually take Yan down and dominate him with his grappling. So fans can expect a wrestling-heavy approach from Sterling at UFC 259. However, dominating the champion, Petr Yan is easier said than done.

Petr Yan has the power to knock guys out in the bantamweight division. He has ferocious striking in his arsenal. The way he finished two UFC legends, Jose Aldo and Urijah Faber, in his last two fights strikes fear in the heart of his opponents.

Yan has never been tested in the wrestling and grappling department by someone as good as Aljamain Sterling. But, so far it has not been easy to dominate Yan on the ground as well.

Yan would like to keep the fight on the feet. However, the fans might see Yan in trouble on the ground for the first time in the octagon at UFC 259.

Petr Yan gets better as the round progresses. Though his output is not insignificant in the early minutes of the fight he does take some time to figure out his opponents. And that won’t be easy to do against someone like Sterling.

Sterling has a 4 inches reach advantage over Yan. He has some vicious leg kicks to cause some serious damage while controlling the range. His boxing is solid. And it won’t be easy for Yan to outclass Sterling in striking even though he is the better striker out of the two.

The only bad performance in Sterling’s career was against Marlon Moraes. But, Moraes caught him with a knee while Sterling. Now there is a possibility that Yan catches Sterling and TKOs him. However, if we compare skills vs skills, Sterling is the better fighter and he should get the job done at UFC 259.