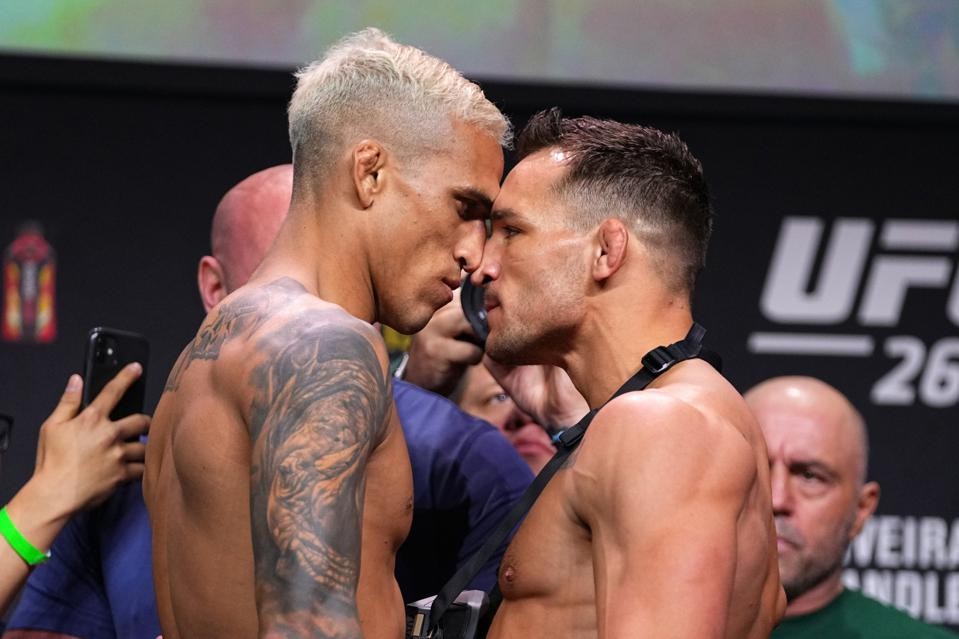 UFC 262 features a main event between Michael Chandler and Charles Oliveira for the vacant lightweight title. The era of Khabib Nurmagomedov is over as UFC looks for its next lightweight king.

Many fans believe Michael Chandler does not deserve the title after his win over Dan Hooker. But this is the best fight UFC could have booked considering the fact that all the top title contenders in the division have lost to the former champion. Irrespective of who wins at UFC 262, we will have a lightweight champion who has never been beaten by Khabib Nurmagomedov.

Going into the fight Charles Oliveira is the favorite to become the new lightweight champion. But, the majority of the fans seem to believe Michael Chandler will win at UFC 262.

Michael Chandler knocked out Dan Hooker on his UFC debut and he certainly deserves a lot of credit for that. Dustin Poirier, who knocked out Conor McGregor in 2 rounds, could not knock out Dan Hooker in 5 rounds. That just goes to show that Chandler has some serious power in both of his hands. He can knock his opponents out from orthodox or southpaw positions. And lately, he has looked comfortable fighting from both stances.

But, Chandler is not a notorious knockout artist. Sure, he has the power and he has some great one-punch KOs in his resume. But the narrative that all Chandler needs to do is close the distance and land a few power punches to win the fight does not seem too logical.

Read More: How much did Charles Oliveira earn for his fight against Tony Ferguson?

Charles Oliveira might not have the best chin in the lightweight division but he can survive the early furry from Chandler. But the key thing is how Charles Oliveira is going to approach the fight. Oliveira put the pressure on Tony Ferguson and Kevin Lee and put them on the back foot. Oliveira needs to do the exact same thing here.

If he plays the distance game with Chandler then he can do a lot of damage with his leg kicks. Oliveira was landing hard leg kicks on Tony Ferguson before the fight went to the ground. The biggest mistake Oliveira can do against Chandler is letting him control the octagon. Dan Hooker, who is usually the aggressor in his fights. decided to circle around and avoid the power hand of Chandler and paid the price for it.

Michael Chandler is too quick with his in and out movements and when he lands he makes sure it counts. But, Oliveira will likely not allow Chandler to set the pace early on. But he will have a hard time controlling Chandler on the ground.

Michael Chandler is a phenomenal wrestler and a solid grappler. So Oliveira will not secure easy takedowns against Chandler and even if he does it is really hard to submit Michael Chandler.

When it comes to cardio, Michael Chandler has the advantage over Charles Oliveira. Oliveira has never fought 5 rounds in his long UFC career. But, Chandler has been through some grueling wars on multiple occasions. And he does not slow down as the fight progresses. But, Oliveira’s gas tank has always been a concern. So it won’t be surprising if Michael Chandler finishes Oliveira by submission if the fight goes to the later rounds.

Read More: UFC 262 start time and how to watch

This is an exciting fight and it’s very uncertain who will come out on the top at UFC 262. But, Michael Chandler is likely to get the job done at UFC 262. There is a huge threat that Michael Chandler will knock out Oliveira in the first or second round. And if the fight goes to the championship rounds Chandler will be able to stay ahead on the judges’ scorecards by being the more active fighter.

Now Oliveira’s submission game is the most vicious in UFC right now. But, it’s hard to imagine that he will be able to manhandle Chandler as he did against Tony Ferguson. But, if Charles Oliveira goes out there and destroys Chandler on the ground the era of Khabib Nurmagomedov will be officially over as Oliveira will go on to rule the lightweight division for a long time.