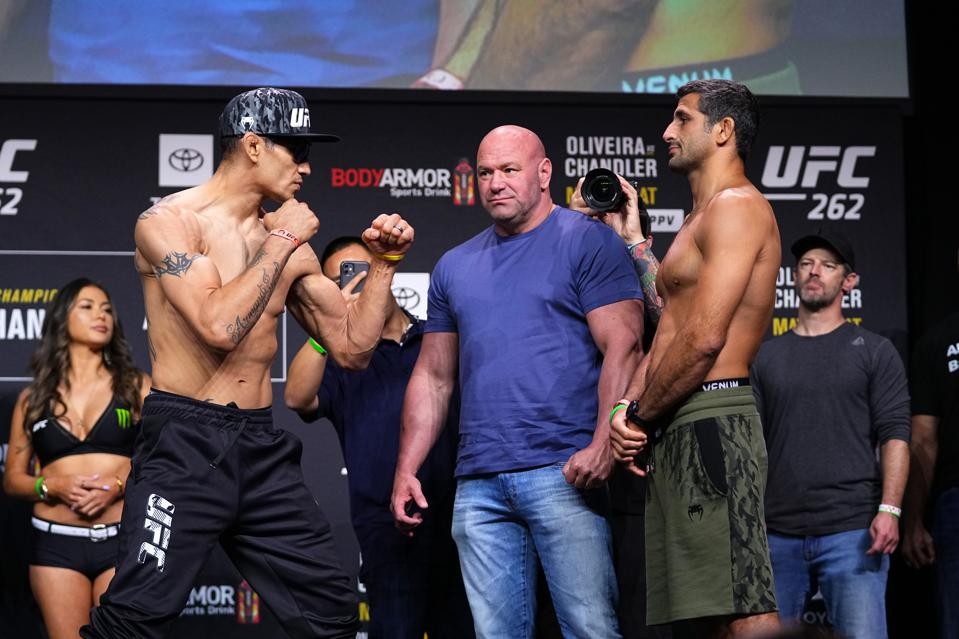 UFC 262 features an exciting lightweight bout between Tony Ferguson and Beneil Dariush. Though Michael Chandler and Charles Oliveira are fighting in the main event it was clear from the press conference who the fans are looking forward to seeing at UFC 262.

It’s heartwarming to see Tony Ferguson get the support from the fans that he deserves. But, Ferguson is on a two-fight losing streak at the moment. And even if it is hard to admit there is a possibility that Tony Ferguson might never be the old “El Cucuy” who strike fear in the hearts of his opponents.

On the other hand, Beneil Dariush is one of the most exciting fighters in the division who has not received recognition yet. But, a fight against Tony Ferguson, who is a huge fan favorite, might just be the opportunity he needed. But will he be able to deal with the chaos Tony Ferguson will bring to UFC 262?

This fight is going to be one of the most exciting fights of the night. It’s a great matchup. Both Ferguson and Dariush fight at a crazy pace and there will be a lot of strikes thrown in this fight.

If there is anyone who can match the craziness that Ferguson brings to the octagon then Dariush is that guy. Dariush might be on his way to getting knocked out but he will not stop throwing bombs. There is absolutely no quit in both Ferguson and Dariush. But this fight does not favor Tony Ferguson for one specific reason.

Had this fight been a 5 round fight then Tony Ferguson would have been a huge favorite despite coming off two big losses. However, in a 3 round fight, the biggest weapon of Ferguson goes out of the window, his cardio. Dariush has slowed down in the past even in three-round fights but he can deal with Ferguson’s pressure for three rounds.

Skill-wise both fighters are fairly similar. They are both good grapplers but if the fight goes to the ground then Dariush will be more comfortable than Ferguson. In striking, Dariush is more technical but Ferguson will have the higher volume and he will be more unorthodox. Dariush, on the other hand, will be looking to knock out Tony Ferguson with his power shots.

But, it’s hard to imagine a scenario where Benei Dariush knocks out Tony Ferguson. Justin Gaethje could not do it even if he landed his best shots at UFC 249. So we can expect this fight to go the distance. And considering the fact that Dariush slowed down against Diego Ferreira in a 3 round fight, we can expect the same result at UFC 262.

However, Beneil Dariush is a big threat to Tony Ferguson, and if Ferguson can’t keep the fight standing it will be a tough night for El Cucuy.