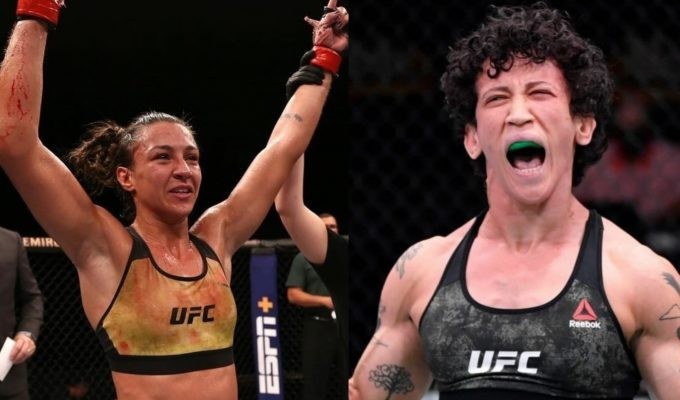 This weekend at UFC 267 the fight fans will witness a power-packed fight card which will be taking place at the Etihad Arena in Abu Dhabi. In the featured prelims, Amanda Ribas will be taking on Virna Jandiroba in a Strawweight bout.

Amanda Ribas suffered her first UFC loss in her last outing. At UFC 257, she was finished by Marina Rodriguez in the second round. The loss snapped her five-fight win streak with wins that included Mackenzie Dern, Paige VanZant, and Randa Markos. Ribas was scheduled to fight Angela Hill in May and in June, but COVID halted those fights.

Virna Jandiroba is a former Invicta FC strawweight champion, who has won three of her last four bouts. After losing an unanimous decision to Mackenzie Dern at UFC 256, Jandiroba rebounded with a second-round TKO win over Kanako Murata in June. She dislocated the Japanese flyweight’s elbow during the first round with a deep armbar.

Ribas seemed to have all the makings of a contender before she ran into Marina Rodriguez. Ribas has a strong defensive wrestling and pretty quick accurate hands. She does like to mix in her own takedowns though, which she was even willing to do with Mackenzie Dern.

Virna Jandiroba is quite the opposite of Ribas, which makes this a fun clash. She has nice striking, but a lot of it is winging hooks until she’s close enough to grab on to her opponent. She very much wants every fight on the ground and is willing to even jump guard to get it there.

Ribas was able to take Mackenzie Dern down and stay safe over the course of a couple of minutes. The rest of the time she was able to neutralize the grappling threat and have her way on the feet. Jandiroba may have a better wrestling, but we think it won’t bother Ribas.