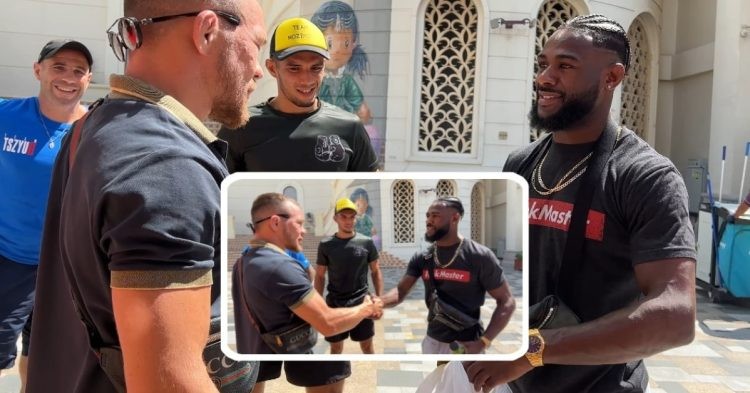 Aljamain Sterling will defend his UFC bantamweight title for the second time at UFC 280. His first title defence came against Petr Yan at UFC 273, whom he had beaten at UFC 259 to win the belt in the first place. Throughout the course of their two fights, they had an intense rivalry. However, it looks like they buried the hatchet after their last encounter in April this year.

As mentioned previously, Aljo is set to fight TJ Dillashaw at the upcoming PPV in Abu Dhabi. Interestingly, the event will also feature Petr Yan in the main card. Yan will go up against a young sensation in the 135lbs division, Sean O’Malley. Hence, both Yan and Aljamain have landed in UAE to take part in their respective fights. In a recently released video, they could be seen crossing paths in the country.

In the video, the former bantamweight champ Petr Yan could be seen asking Aljo when he landed in the UAE. In reply, Aljamain Sterling added that he had landed in the morning of the day when the video was recorded. Afterwards, they both wished each other well for their respective bouts and went their separate way.

It just shows good sportsman spirit. When they were rivals, neither fighter let the other one breathe easily for even a second. However, now that they are not at odds with each other, they seemed to share a friendly bond.

Aljamain Sterling and Petr Yan have a great history together. They came across each other in 2021 at UFC 259. Petr dominated the fight throughout the duration of the contest. However, Yan landed a knee on Aljo which was judged illegal as Sterling was still on the ground. As a result of that, Aljo won the belt as Petr was disqualified.

Following the disqualification loss, the Russian fighter did not hold back his criticism of Sterling and called him a fake champ. Judging by how the fight was playing out the first time around, even the fans and the critics agreed with the notion that Aljo was a paper champ.

Hence, it was expected that Yan would just run through the Funk Master and regain his belt at UFC 273. But Aljamain shocked the world as he somewhat dominated Yan in the rematch and retained the belt. Although Sterling has 2 wins over Yan officially, fans still think Yan was going to win the first fight.

Underneath the video of them meeting ahead of UFC 280, fans have demanded a trilogy between them.

Yous are 1 each we need a trilogy

Respect. Love to see it! Aljamain is such a great ambassador for MMA.

Great to see the respect among great athletes 😁

However, in the comments section beneath the YouTube video of the same interaction, one fan had a different perspective. A user by the name of James wrote, “That had to be an awkward moment when they were both walking down the sidewalk and saw each other.”

If both win their respective fights at UFC 280, the trilogy fight between the two is not out of the realm of possibility. Even UFC President Dana White was not a fan of the decision at UFC 273. So a third fight seems inevitable at the moment.