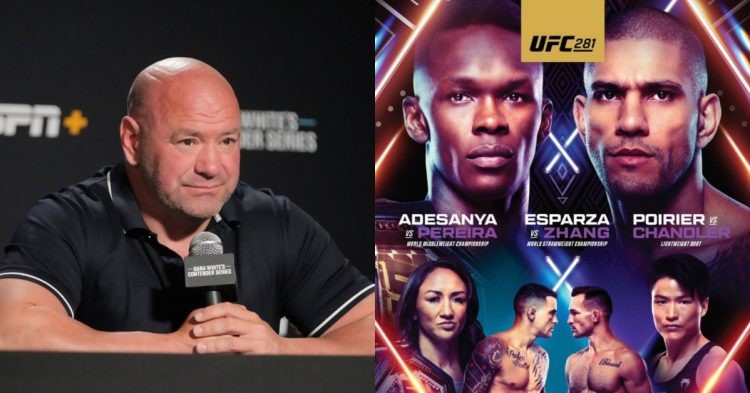 UFC will be back in New York for a big PPV card this weekend, UFC 281. The company’s last trip to Madison Square Garden was in November 2021, when Kamaru Usman rematched Colby Covington in the iconic arena. But this time, It will be the middleweight champ Israel Adesanya, who defends his title against Alex Pereira in the main event.

The fans are really excited about the fight as Adesanya looks to avenge the only knockout loss of his career. Fan favorite Zhang Weili will get the third title shot of her career on the card. She looks to challenge the current strawweight champ Carla Esparza in the co-main event of the card. The excitement increased quite a lot when fans found out Dustin Poirier will fight Michael Chandler on the card.

There is no doubt that the card has the potential to be an all-time great. But the venue also adds a lot of luster to the PPV. On UFC’s first trip to the arena, Conor McGregor delivered one of the most memorable events of UFC history at UFC 205. Georges St-Pierre became the middleweight champ at UFC 217, which also took place at MSG. Even at UFC 268, Justin Gaethje and Michael Chandler delivered one of the best fights ever!

So which celebrities will be present inside the arena to witness the fights go down? Let’s find out

UFC has become synonymous with MMA. Although there are other major promotions, no company can attract the level of celebrities that the UFC can. From NFL legend Tom Brady to former US President Donald Trump, UFC had a lot of VIPs in attendance previously. Donald Trump was in attendance inside the Madison Square Garden at UFC 244. Recently Dana White revealed some major names who are set to be at UFC 281.

Street journalist Adam Glyn caught up with the UFC President and asked White about the celebrity presence at the PPV event. From movie stars to legendary fighters, it looks like the upcoming event will not lack the attendance of megastars.

“Yeah, we got Miles Teller, we got Jared Leto, we got Tyson’s coming. Um Halle Berry’s coming, we got a ton, there’s a ton of people coming,” said Dana

In the same interview, Dana also gave the 185lbs champ Israel Adesanya a lot of credit for agreeing to fight Alex Pereira without a moment of doubt. UFC fans already got a taste of his power against Sean Strickland at UFC 276. If he gets any kind of opening, one shot is all it takes for Poatan to knock out his opponents, as Adesanya himself knows. So Adesanya is getting ready for the toughest title defense of his UFC run yet!