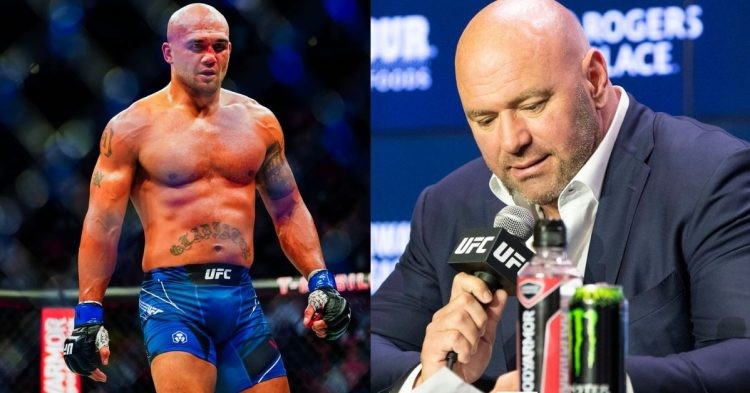 UFC 282 seems like the most cursed PPVs of the year after two huge fights get cancelled due to injuries. First it was the main event title fight between Jiri Prochazka and Glover Teixeira. And now it’s the welterweight fight between Robbie Lawler and Santiago Ponzinibbio.

Former UFC welterweight champion, Robbie Lawler was making his octagon return after his TKO loss against Bryan Barbarena at UFC 276. As per reports, Lawler pulled out from the fight due to an undisclosed injury. The severity of Lawler’s injury is still unknown as he is yet to issue a statement on the situation.

Robbie Lawler has had 5 losses in his last 6 fights. His last win was against Nick Diaz, who is not ranked in UFC welterweight division. Besides that it’s been years since Robbie Lawler had a win over any ranked UFC opponent.

With stake this high for Robbie Lawler, fans were expecting him to put on a show and get back on the winning column. However, the unexpected injury has certainly ruined his comeback.

It’s not official whether UFC will be looking to book a short notice opponent for Santiago Ponzinibbio. However, rising star of the UFC lightweight division, Terrence McKinney is already looking to fight at UFC 282 on short notice.

Terrence McKinney had an unbeaten UFC record before he took on Drew Dobber on a short notice lightweight fight. And he is willing to risk it again by taking on Ponzinibbio at UFC 282 on days notice.

The upcoming UFC PPV is still a stacked card after cancelation of two high profile fights. Jan Blachowicz takes on Magomed Ankalaev for the vacant light heavyweight title in the main event. On the other hand, Darren Till is making his octagon return against Dricus Du Plessis.

Besides that, arguably the biggest star from the UK, Paddy Pimblett is taking on Jared Gordon in his fourth UFC fight. UFC featherweight, Bryce Mitchell takes on Ilia Topuria.

The card has certainly taken a huge blow after Jiri prochazka and Robbie Lawler’s injury. However, there is a still a plenty of exciting fights on the card left for the fans to close the year with a bang.