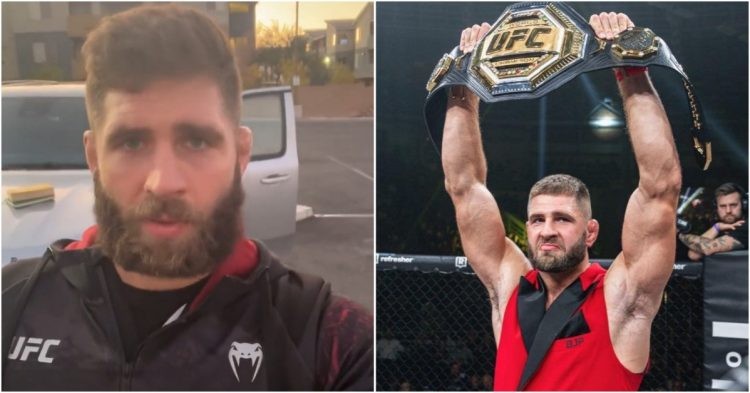 UFC 282 is one of the most anticipated events of the year. The PPV will take place on December 10th inside the T-Mobile Arena, in Las Vegas. The event was originally supposed to feature the rematch between then-UFC light heavyweight champ Jiri Prochazka and Glover Teixeira. However, in a surprising turn of events, the bout will no longer headline the event.

News broke that Jiri Prochazka suffered a horrible shoulder injury. He will have to go under the knife and the recovery time is expected to be around 12 months. Jiri then showed his honor as a fighter and vacated the light heavyweight belt. The last PPV of 2022 will now feature Magomed Ankalaev vs Jan Blachowicz for the vacant championship.

Champions often suffer long-term injuries and stay away from active competition. But they retain their championship belt.

To keep the division moving, UFC then books interim title fights. However, Jiri’s decision to vacate the belt ensures that the 205lbs weight class will move along nicely and it will have an active champion at the top. Jiri was already a fan-favorite fighter and his selfless decision earned him a lot of respect from the fans.

UFC President Dana White issued a statement to Yahoo! Sports immediately after the news. There have been a lot of shoulder injuries in the UFC over the years.

However, Dana called Jiri’s injury one of the worst that the company doctors have ever seen! But he also lauded Prochazka for vacating the belt without even the promotion having to ask him. Although he is certainly upset about the situation, it does not look like Prochazka is falling apart. He took to Twitter and addressed the fans. Prochazka also promised to make a strong comeback.

As far as Glover Teixeira is concerned, UFC apparently offered him the fight against Magomed Ankalaev. But the former champ declined as it was a short-notice replacement.

Since Jon Jones left the division in 2020, UFC has had 3 separate light heavyweight champs. Jan Blachowicz was the first to grab the belt at UFC 253. Then Glover took the belt from him at UFC 267. But Glover’s reign was a short one as Jiri Prochazka won the strap in an all-time great fight at UFC 275. Now, at UFC 282, fans may see a fourth fighter hold the title if Ankalaev wins the bout.